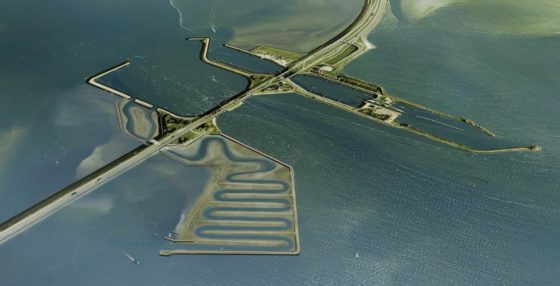 An artist’s impression of what the passage will look like. Illustration: DeAfsluitdijk.nl

Work has started on a four year project to boost fish numbers by allowing them free passage from the Wadden Sea to the IJsselmeer lake via a gap in the Afsluitdijk, which was built as part of Dutch flood defences and completed in 1932.

Migrating fish, which need both salt and fresh water to breed, are already gaining access via the sluices of the Afsluitdijk but strong currents mean that only the strongest swimmers make it to the other side.

The new project involves developing a fish migration river which cuts through the dyke allowing fish to swim through at their own pace. Once finished, greater numbers of salmon, sea trout, herring, and eel will be able to make the trek while weaker swimmers like elver, three-spined sticklebacks and fry will stand a much better chance of survival.

The Afsluitdijk, a 32 kilometre dyke which links the provinces of Noord-Holland and Friesland, is currently undergoing an extensive programme of maintenance to ensure its safety to 2050.

The migration river is a combined effort by a number of conservation organisations including the Waddenvereniging and It Fryske Gea and the provincial authorities of Noord-Holland and Friesland.

‘Migration routes have been blocked by numerous dams and dykes all over the world. The fish migration river will be an iconic fish passage at an iconic site and set an international example,’ Van der Heij said.

Work on the migration river is expected to take four years. Earlier initiatives to ensure  migrating fish are able to travel to their spawning grounds include opening the Haringvlietsluis in Zeeland at certain times to allow salmon, eel and sturgeon through.

However, many of them ended up in dragnets. In July last year fishery minister Carola Schouten announced a 500 metre no fishing zone around the Haringvlietsluis.