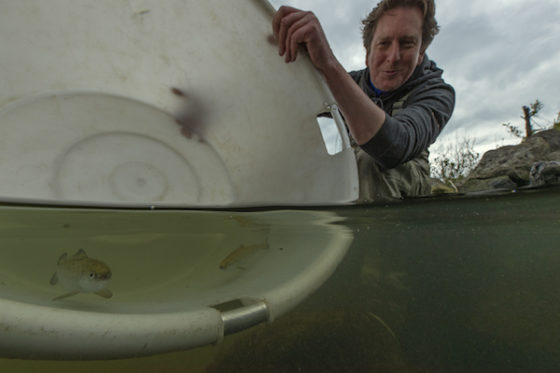 International environmental organisations are calling on the Dutch government to ban fishing around the Haringvlietdam to allow protected migrating fish to reach their spawning grounds at Thursday’s meeting of the Commission for the Protection of the Rhine in Amsterdam.

Salmon, eel and sturgeon numbers have been falling for years, partly because the Haringvlietdam, built in 1971 as part of the coastal defence system, blocked the migratory route of the fish from the sea to the river.

In 2019, after years of wrangling – the Dutch feared the salt water might damage agriculture – it was agreed to open the sluices of the dam a crack several times a year to let the fish through. However, many fish have been ending up in Dutch drag nets and fish traps, the organisations claim.

‘The Dutch government invested €70m in opening up the Haringvliet sluices but to give the fish a chance of survival we need a fishing free zone on both sides of the dam. Unfortunately this hasn’t happened yet,’ WWF spokesman Bas Roels said.

A fishing ban would directly affect other countries as well, the organisations say. Germany and Switzerland have invested millions in projects to promote the return of salmon and other threatened species and the removal of barriers for the safe passage of the fish. But as long as the fish are intercepted at the Haringvlietdam all these efforts are in vain, the organisations say.

The organisations presented Dutch agriculture minister Carola Schouten with a petition for an immediate fishing ban in November of last year as well but no action was taken. At the time D66 MP Tjeerd de Groot said it imposing such a ban would be very simple and the agriculture minister should ‘simply make sure no one fishes near the Haringvliet sluice gates’.