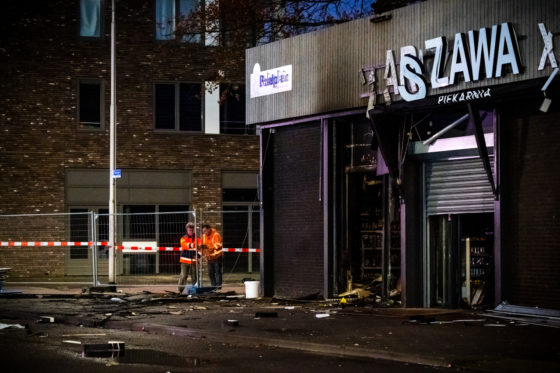 The explosion destroyed the interior of the Warszawa supermarket. Photo: ANP/Rob Engelaar

An explosion at a Polish speciality store in Tilburg has seriously damaged the building and neighbouring properties.

The blast at the Warszawa XL outlet on Paletplein was reported by a neighbour at 2.20am on Monday. It is the fourth time in a month that Polish supermarkets belonging to the same family have been hit by deliberate explosions.

In December three premises in Beverwijk, Aalsmeer and Heeswijk-Dinther, all bearing the name Biedronka, were damaged in similar blasts. The shops have no connection with the discount chain in Poland of the same name.

The latest blast is reported to have almost completely destroyed the interior of the store and the windows of storage areas belonging to neighbouring apartments. Nobody was injured.

Police were called by one witness who heard hammering outside the shop a few minutes before the explosion happened.

The owner, Taha Mahmoed, told Omroep Brabant he was mystified as to why his shops had been targeted and accused police of not investigating the incidents thoroughly.

‘I’m devastated,’ he said. ‘It was a good shop with plenty of staff that was doing good business.

‘The shop only opened in October, and it was going very well. I can’t understand it. A bomb in the Netherlands. How could it happen? This is a well run country.

‘The police are lazy. In Aalsmeer and Beverwijk they promised to take action, but nothing has happened.’

Police are investigating whether the latest explosion is linked to the three in December. ‘We are not burying our heads in the sand,’ a spokesman told NOS. ‘We are in contact with the police in the other municipalities and are looking into the possibility as part of our investigation.’