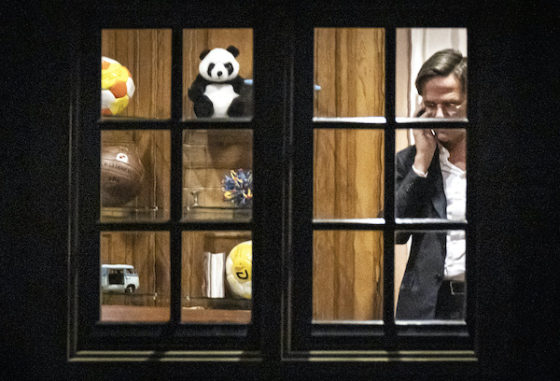 Ministers will decide today whether or not to pull the plug on the current coalition in the wake of the childcare benefit scandal, and many commentators now say that the government’s collapse is inevitable.

The decision by Labour party leader Lodewijk Asscher to resign on Thursday has only added to the pressure on Mark Rutte and his team of ministers to stand down, insiders say.

Asscher was social affairs minister at the time of the scandal, in which thousands of families were wrongly accused of defrauding the tax office and ordered to pay back benefits, causing many acute financial problems.

Ministers were tight-lipped as they left party meetings on Thursday evening, ahead of today’s crunch decision. ‘We are discussing the issue in the cabinet and we are very clear about it,’ D66 leader Sigrid Kaag told reporters.

Rutte said after an extra ministerial council on Tuesday evening that the government intended to draw ‘fundamental and substantial’ conclusions, but refused to speculate on the future of his administration.

A report on the scandal in December said an ‘unparalleled wrong’ has been done to parents who were accused of defrauding the childcare benefit system.

Ministers, civil servants, parliament and even judges had a role in the affair, which left parents powerless to fight back when accused of cheating, the committee, led by CDA MP Chris van Dam, said in its final report.

Economic affairs minister Eric Wiebes, at the time junior finance minister with responsibility for benefits, was singled out for particular criticism.

Rutte is known to want to stay on to tackle the coronavirus pandemic, but other party leaders, such as Kaag, say ‘political consequences’ from the report are unavoidable.

If the cabinet does resign, ministers will stay on in a ‘demissionaire‘ or holding function until the general election on March 17. This means they will be unable to take decisions deemed by the upper and lower houses of parliament as controversial.

The cabinet is expected to either stand or fall as a unit, but is anxious to avoid the ‘nightmare scenario’ of losing a confidence vote after a closely watched, combustible debate, the Volkskrant reported.

Opposition party GroenLinks plans to table a motion of no confidence on Tuesday which will be supported by the Socialist Party and Geert Wilders’s PVV group.

It is unclear how long Friday’s crucial cabinet meeting will take.

An opinion poll published by Ipsos earlier this week suggested only 8% of the Dutch felt the cabinet should resign over the scandal.

Although seven out of 10 said there should be consequences for the government, they were keener to see civil servants responsible for apply the policy and individual ministers to be sacked.