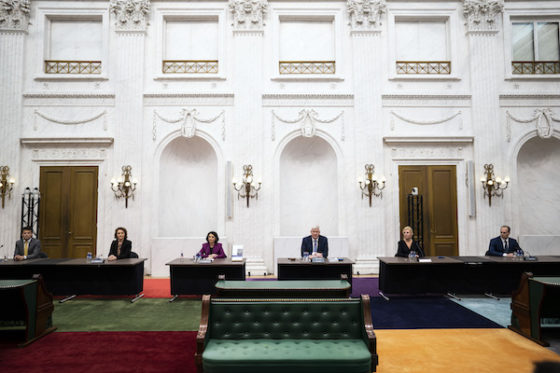 An ‘unparalleled wrong’ has been done to parents who were accused of defrauding the childcare benefit system, a parliamentary committee investigating the scandal said on Thursday.

Ministers, civil servants, parliament and even judges had a role in the affair, which left parents powerless to fight back when accused of cheating, the committee, led by CDA MP Chris van Dam, said in its final report. Everyone involved in the state apparatus should ask themselves how such a thing can be prevented from happening in the future, the report, based on several weeks of hearings, said.

Hundreds of parents found themselves in serious financial difficulty after the tax office began clawing back thousands of euros in benefits which they said had been wrongly paid in 2012.

The focus when paying the benefits was on efficiency and preventing fraud, but individual situations were rarely looked at, even if mistakes were purely administrative, the report said.

Economic affairs minister Eric Wiebes, at the time junior finance minister with responsibility for benefits, was singled out for particular criticism. He, the report said, knew about the group- based approach, the lack of legal protection and the disproportionate consequences of the approach to dealing with fraud on parents.

The finance ministry administered the childcare benefit system as a ‘mass process’ in which parents were wrongly branded as fraudsters, the report said. Judges too failed in their duty to protect individual citizens by focusing totally on rules which may not have been in line with the law.

MPs said in initial reactions that the report’s conclusions are clear and that lessons must be learned. VVD MP Helma Lodders told broadcaster NOS that the government, in all its facets, had ‘failed collectively’. Nevertheless, it is too early to talk about any political repercussions, she said. ‘Today, the parents are central and they should be compensated as soon as possible.’