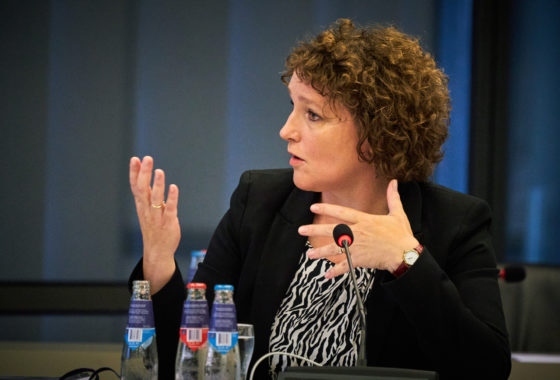 The most galling thing about the childcare benefit scandal, says Renske Leijten, is that it happened in plain sight. Rank and file civil servants were aware that the tax service’s dragnet anti-fraud strategy was having devastating consequences for the parents who became entangled in it, but their warnings went unheeded.

Leijten, a Socialist Party MP, has been one of the most prominent campaigners in politics for the wronged families, along with her Christian Democrat colleague Pieter Omtzigt. The recent parliamentary investigative committee hearings on the scandal have laid bare how frequently and, she argues, systematically, the red flags were missed.

‘It’s not just about a couple of rotten apples in the crate infecting the others,’ she says. ‘It’s the fact that nobody cleared out the rotten apples.’

Several enquiries over the last two years have established that the Belastingdienst, the Netherlands’ tax administration, wrongly accused thousands of parents of defrauding the childcare tax allowance system. It ordered them to pay back tens of thousands of euros without recourse to debt relief, obstructed their efforts to seek redress and illegally discriminated against families with dual passports.

Yet despite all the court judgments against the tax service, the media exposés, parliamentary investigations, ministerial resignations and promises to put things right, the only compensation families have received so far is a one-off ‘Christmas bonus’ of €750.

The reluctance to compensate has been a feature of the government’s response since the tax office’s excesses were first brought to light by RTL Nieuws and Trouw newspaper in 2018. ‘My conclusion is that to some extent this was an officially sanctioned failure, in that nobody stepped in, nobody listened to warnings from whistleblowers and nothing was done with the significant legal advice that was given,’ says Leijten.

‘I get the impression that it still hasn’t sunk in how serious this has been. An entire organisation has been set up to compensate the parents who are victims of this, but it’s been so slow and so torturous that you have to ask why it’s so difficult. The government has failed, apologies have been made, now it’s time to compensate them appropriately.’

The committee will publish its report into the affair on Thursday, with a debate in parliament to follow in the New Year. Its findings are likely to make uncomfortable reading for senior managers and politicians. ‘I don’t think anyone in the government will be happy with this report,’ says Leijten. But she says a full parliamentary inquiry is still needed to establish the full extent of the tax office’s transgressions. So far official enquiries have been limited in scope and designed to minimise liability, she argues.

An earlier committee headed by the former cabinet minister Piet-Hein Donner laid the blame at the feet of the political establishment and concluded that although parents should have their benefits restored, they were not entitled to compensation because the tax service had acted within the law.

‘The thing that keeps coming back, and that I think is dreadful, is that every attempt at finding a solution, such as the Donner committee, didn’t focus on finding a solution for the parents, but for the government,’ says Leijten. ‘There are a lot of references in this dossier to setting precedents – that it mustn’t cost too much money, the group [of aggrieved parents] mustn’t become too big, and that’s what’s so distressing.’

The problems with childcare allowances have their roots in another scandal, the ‘Bulgarian fraud’ that was exposed in 2013. Organised criminals took advantage of their EU freedom of movement to register ‘phantom residents’ in the Netherlands, who claimed up to €10,000 in upfront rent and healthcare allowances before vanishing. A system designed to ensure people could get quick access to welfare support became a goldmine for professional fraudsters.

Parliament hastily passed a law giving inspectors wider powers to stop and reclaim tax allowances in cases of suspected fraud. But the first people to be hit by the beefed-up inspection teams were not organised criminals, but working families with young children who were accused of overclaiming for nursery care.

Between 2014 and 2019 the tax office sent letters to between 9,000 and 26,000 families telling them their childcare allowance was being stopped, with no explanation other than that their records were incomplete. In some cases it was something as simple as a declaration not being signed or a missed top-up payment.

The consequences were devastating: the parents had to pay back the benefits in full, often amounting to tens of thousands of euros, and barred from applying for childcare support in future years. Many were forced to give up their jobs or move out of their homes because of their reduced income. Worse, anyone who owed more than €3,000 was automatically classified as a deliberate or severe debtor, which meant they were unable to repay the money in monthly instalments. An internal tax office investigation this year found that this ‘deliberate or severe debt’ label was unjustly applied in 96% of cases.

Last month’s committee hearings took evidence under oath from senior government officials and politicians, including the prime minister, Mark Rutte. At times it was a masterclass in evasiveness and blameshifting.

Chris van Dam, the Christian Democrat chairman of the panel, remarked at one point that he seemed to be watching the ‘world championship in management incompetence.’ Current and former ministers said they were unaware that the tax office was breaking the law by cutting off parents’ allowances without offering them the chance to correct their paperwork.

Officials, in turn, protested that they were merely carrying out their political masters’ orders to clamp down on fraud. It led to some pointed exchanges between witnesses and the MPs on the committee, including Leijten. When the former head of the tax allowances division, Gerard Blankesteijn, blamed the ‘obstinate’ attitude of the social affairs ministry and its refusal to ‘listen to the tax office’ for making the problem worse, Leijten retorted: ‘You’re pointing at the social affairs ministry. Isn’t that a bit hypocritical?’

Even now, says Leijten, the tax office continues to thwart attempts to uncover the full extent of its abuses. A memo from 2017 in which a senior legal officer advised managers to compensate parents because they had been denied their legal rights, was not acted on: instead the official moved to a different department and her team was quietly wound up.

The memo only became public knowledge a few weeks before the parliamentary hearings began. ‘The warning signs that things weren’t all right weren’t just unheard, they were deliberately ignored and filed away,’ says Leijten. ‘If your organisation is clearly set up in such a way that documents can disappear, the problem goes further than someone having the wrong intentions.’

The committee’s remit did not extend to the question of discrimination, but a separate inquiry by the privacy watchdog AP concluded that the tax office illegally kept records of parents’ second nationalities.

Since 2015 municipalities have only registered people’s first nationality in order to prevent discrimination, but the Belastingdienst accessed older records that showed whether people also held Moroccan, Turkish or other passports. The vast majority of families involved in the scandal were dual nationals.

The tax office is also facing criminal charges if prosecutors decide there is enough evidence of discrimination, after the new deputy finance minister, Alexandra van Huffelen, initiated an inquiry. ‘It is evident that discrimination took place, not just in respect of dual nationality but on other issues where unjustified distinctions were made,’ says Leijten. ‘That involves where people live and what they earn. There is an element of racism in that, but also an element of discrimination.’

Leijten says it is time for ministers to take political responsibility. Although the deputy finance minister, Menno Snel, resigned in December 2019 over his handling of the tax office, particularly the lack of information given to parents, he did so because he had lost the confidence of parliament.

Snel told last month’s hearings that the tax allowances division had become a ‘factory’ without ‘a drop of humanity’. ‘What Menno Snel said was that he was no longer supported,’ says Leijten. ‘That’s not the same thing as taking responsibility for a huge stain on the government’s record.’

With the election just three months away, Leijten predicts that the tax office scandal and the wider question of how to overhaul the benefit system will be an issue in the campaign. On Monday Van Huffelen presented a 28-point list of proposals designed to make the system less complex and more effective, but reform will be a task for the next cabinet.

‘I think everyone agrees now that we need to do away with the system of tax allowances, but it’s not entirely clear what everyone thinks should replace it,’ she says. As a member of the Socialist Party, Leijten favours bringing out-of-school care back into the public sector. ‘Tax allowances are compensation for high costs elsewhere,’ she says. ‘The question is why it has to be a market. Childcare is really part of the education system. That means we should make it free, or at least mainly free.’