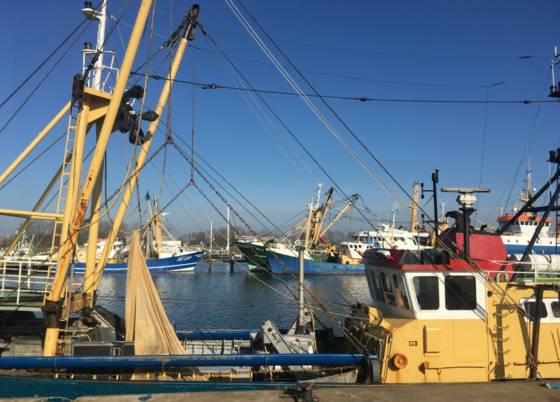 As EU and British negotiators pause their endgame talks on whether any Brexit trade deal is possible, experts predict troubled waters ahead for the Dutch fishing industry.

Research by the European Fisheries Alliance suggests that between 2006 and 2015, Dutch fishermen hooked an average catch of 123 tonnes per year from British waters. This netted a value of €85 million – 35% of the total.

But the extent of access the Dutch (and other European nations) will have to UK waters in future is currently unclear, and trade experts worry it could be used as a political chip in future years. More questions are raised by the fact that some fish in the Dutch industry is hauled in by ships flying the British flag – a practice that could be reeled in by UK customs officers.

‘If there’s no deal, then British waters are no longer accessible for Dutch fishers, which would lead to enormous pressure on other areas,’ Pim Visser, director of VisNed fishermen’s union, told DutchNews.nl this weekend.

Industry bodies the VNO-NCW and MKB-Nederland are also concerned. ‘It is important for Dutch fisheries that clear agreements are made about fishing rights giving them continued access to British waters,’ said spokesman Kees Bakhuis. ‘It is also important to have clarity at a stroke, rather than an agreement that is revised on a yearly basis.’

But the waters are rather less clear than might be expected, according to Vistikhetmaar.nl, an information platform funded by the Dutch department for economic affairs.

In an article posted earlier this year, the site notes that ‘Dutch fisheries are partly dependent on fish that is brought in by ships flying the UK flag…[and] on Urk, this is more than 25% of the total value. It is unclear if this supply will be as easy as it is now after Brexit. Brexit might mean that customs plays a large role, for example in applying import duties.’

The UK Maritime and Coastguard Agency confirmed to DutchNews.nl that currently 75 commercial vessels fly under the UK flag, with ownership registered in The Netherlands. A spokesman added: ‘To calculate this figure, we have cross-referenced and validated data thoroughly. Such a figure, however, is not always straightforward to trace when it comes to vessel ownership information and can sometimes mean there are some differences in data.’

It is unclear what will happen to these Dutch-British fishing vessels in future, whether or not an official deal is struck. According to the BBC, because English skippers have sold their quota to boats based elsewhere in the EU, more than half of the English fishing ‘quota’ each year is in foreign hands.

But in an article on the VisNed website, Visser said that political point scoring is a continued risk to the future of the industry in every way. ‘Fishing remains the only area where the Brits could take advantage from a Brexit, so Boris Johnson’s political image is at stake,’ he wrote. ‘The potential gains on the fishing dossier would give him a chance to disguise economic losses in the rest of the economy, at the cost of European fishermen.’