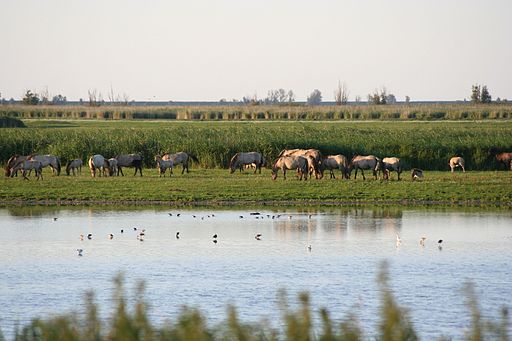 Dutch food and product safety board NVWA has found elevated levels of harmful dioxins in Konik horses grazing in the Oostvaardersplassen nature reserve.

NVWA scientists analysed the meat from five mares and five stallions and found that dioxin levels in three out of the five stallions exceeded official limits, with one of the stallions containing twice the amount allowed.

The check was carried out because of plans to offer the meat for sale. The board did not find anything wrong with the Oostvaardersplassen venison it checked.

Dioxins are by-products of combustion processes, like waste incineration, and are also present in certain pesticides and cooling liquids containing PCBs. They are harmful to people because they can affect the immune system, fertility and cause cancer.

Toxicology professor Martin van den Berg said dioxins can travel distances of hundreds of kilometres on the wind. ‘The Ruhr, Brabant or Europoort are likely sources, depending on wind direction,’ he said.

The Dutch forestry commission Staatsbosbeheer told current affairs programme Nieuwsuur the findings came as ‘a complete surprise’ but said it would now include dioxins in the soil check it carries out every four years.

The discovery comes in the wake of a similar case of excess dioxins in horses grazing on river banks in the province of Gelderland. That was the result of the persistence of a NVWA member of staff, who thought it strange that wild horses should graze in areas where people are warned not to swim or fish because of the level of soil pollution. The sale of the meat from these animals has also been halted.

The NVWA has started an investigation into the connection between the presence of dioxins and the state of the soil along the rivers. The first findings are expected in the summer of 2021.

The meat from culled animals is either sold directly to consumers, or sold via mainstream butchers and supermarkets or is exported abroad.