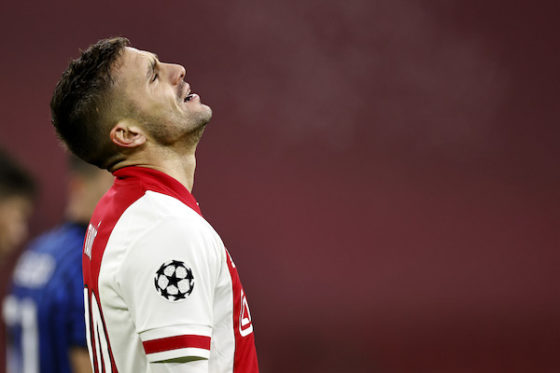 Amsterdam football club Ajax will move down into this season’s Europa League competition after losing 0-1 at home to Italian club Atalanta in the final round of matches in the Champions League group phase.

The defeat put the Dutch side into third place, with Atalanta qualifying for the second Champions League knock-out ticket, behind Liverpool.

The Amsterdam site was beset by illness, and 18-year-old Brian Brobbey made his debut for the club, putting in a good performance in what was a lacklustre Ajax.

‘In a game they knew they had to score in, it was surprising to see Ajax so toothless in attack,’ Uefa reporter Derek Brookman said.

‘Credit obviously to Atalanta for shutting things down, but still; there was too little return from the home side’s attacking players. Klaassen had the best chance, but his shot lacked finesse – indicative of the Eredivisie champions’ overall play. A Europa League place will be scant consolation for the Amsterdam giants.

Ajax have qualified for the knock-out rounds of the Champions League only once in their last eight appearances in the competition.

On Thursday evening, Feyenoord and AZ of Alkmaar will join PSV in the Europa League knock-out rounds if they manage to seal wins. in Group F, AZ will take on bottom-placed Rijeka of Croatia  while in Group K, Feyenoord meet second-placed Wolfsburger away.