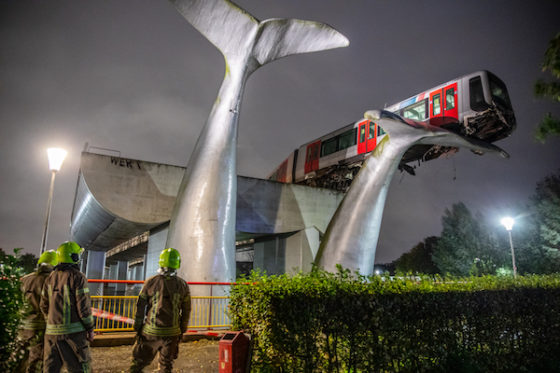 The metro train, suspended in the air. Photo: 010Fotograaf

A metro train serving the town of Spijkenisse, near Rotterdam, has crashed through the barrier at the end of the track and only the sculpture of a whale has stopped it plummeting into the water below.

The train is now suspended 10 metres above a footpath, thanks to the whale’s tail, and is likely to remain there for some time. ‘We are trying to decide how we can bring the train down in a careful and controlled manner,’ a local safety board spokesman told broadcaster NOS.

The accident happened at the De Akkers metro station, which is the terminus for two metro routes C (from Capelle aan den IJssel) and D (from Rotterdam). The driver was able to leave the train himself and was taken to hospital for a check-up. Police say no-one else was on the train at the time.

The driver was later arrested and interviewed by police, but a spokesman for transport operator RET said this was standard procedure for incidents involving trains.

‘It’s not because we think he caused the accident,’ said the spokesman. ‘It’s part of the investigation.’

The crash happened just before midnight and woke people living in the nearby houses. ‘It was a noise that lasted two or three seconds,’ one said. ‘I realized that there was something on the tail… I thought “something very odd is happening here”.’

Local metro services between Hoogvliet and Spijkenisse have been cancelled.

The sculpture Whale Tails, is made of polyester and is the work of Maarten Struijs. The tails were placed in the water at the end of the metro tracks in 2002.

‘If the metro had driven into the other tail, I think it would have crashed through,’ Struijs told AD.nl. ‘Obviously it looks very poetic, but it’s a bonus that the train is being supported by the tail.’