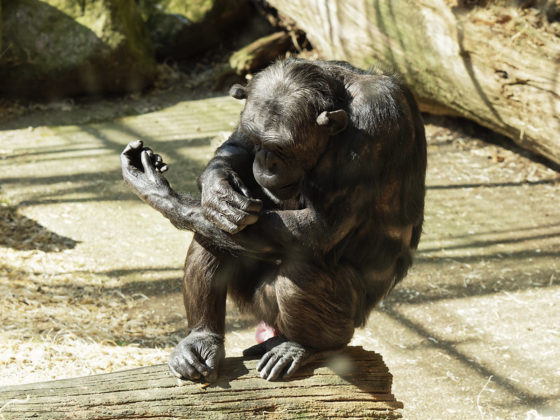 A chimpanzee at Amersfoort zoo in 2018. Photo: Erik de Redelijkheid via Flikr

Two chimpanzees who escaped from their enclosure at Amersfoort’s DierenPark zoo have been shot dead, zoo officials have confirmed.

The zoo says it appears that a keeper did not lock up the enclosure properly, allowing the animals to get out. The investigation will continue in the coming days, but there does not appear to have been a technical error, the statement said.

The decision to shoot the animals, which have been part of the zoo’s chimpanzee group for a long time, was taken because they were demonstrating ‘dominant behavior… which could have led to a dangerous situation,’ the zoo said.

‘This is a black day for the zoo, and we deeply regret the situation,’ the zoo said. Victim support services are being offered to zoo staff and visitors.

A zoo spokeswoman told DutchNews.nl that it would take 10 to 15 minutes for a tranquiliser dart to have an effect on a chimpanzee. ‘ They move very quickly and could have moved inside or outside the park during that time,’ she said. ‘We could have had a disastrous situation, hence the decision not to tranquilise them.