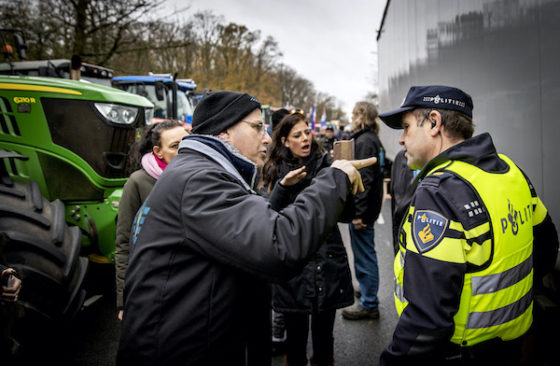 Farmers argue with police in The Hague. Photo: Robin van Lonkuijsen via ANP

Members of radical farmers group Farmers Defence Force are protesting in The Hague on Tuesday, this time to show their opposition to new zoning laws and the government’s buy-out plans to cut farm-related pollution.

The protest led to delays on some roads early on Tuesday morning as farmers headed for The Hague by tractor, and the city centre has been closed off by the army to stop the tractors getting through.

Some tractors were, however, did make it into the city driving over the central reservation, the NRC reported.

The FDF says the new zoning law, which aims to cut red tape by merging a variety of different regulations, will lead to fewer farm permits – although this is disputed by the main farmers union LTO Nederland.

The law was actually passed four years ago but is not due to come into effect until 2022.

Tuesday’s protest, therefore, is focused on king Willem-Alexander, who has to sign every piece of legislation before it comes into effect. However, farmers were banned from holding mass demonstration outside the king’s official residence Paleis Huis ten Bosch.

The FDF is also protesting at the new rules for buying out farmers who are active in highly-polluting sectors such as intensive livestock farming. In particular, they are angry that farmers who agree to give up their companies in return for cash are not allowed to start up a new farm elsewhere.