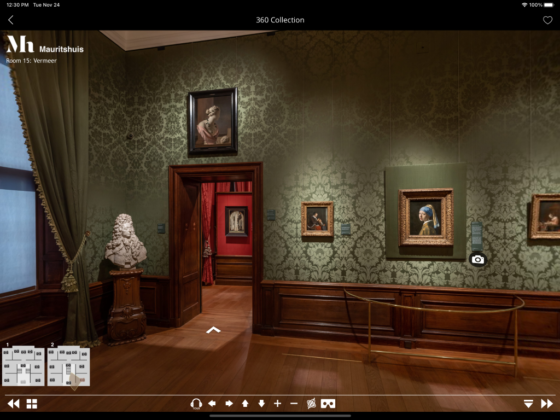 Virtual visitors get the museum to themselves. Photo: Mauritshuis

At 1000 megapixels, Vermeer’s Girl with a Pearl Earring shows intimate details that visitors to the Mauritshuis museum in The Hague are not normally allowed close enough to see. Two casual dabs of paint are enough to bring moisture and shine to the corners of her slightly parted lips, and the famous earring itself is surprisingly translucent – more skin-toned than nacreous white.

On Thursday, the Mauritshuis in The Hague, home to 17th century masterpieces by Rembrandt, Vermeer and Jan Steen, became the first ever gigapixel museum in the world, inviting visitors across the globe to get up close and personal with the entire collection via their mobile phone or computer.

The 1000 megapixel images, which are 100 times sharper than a smartphone can achieve, were created in partnership with Spanish art digitisation company Madpixel, who mapped every inch of the former city palace using a robot, the Madpixel ROB.

Via Madpixel’s Second Canvas app, visitors can enjoy a virtual 360° tour of the listed building and its world-famous works, supported by texts and an audio commentary. The app includes a zoom option for 36 of the pieces, including Van Haecht’s epic Apelles Painting Campaspe – 40+ paintings within a painting – where echoes of the love story between artist and subject in the foreground are revealed when the intricate artworks surrounding them are magnified.

Some of the museum’s masterpieces also have an infrared option, allowing the viewer to peer beneath the paint and see original sketches and changes that the artist has made. In Rubens’ The Garden of Eden with the Fall of Man, for example, two dogs are visible which were later edited out by the painter.

Several museums were eager to pioneer the technology on this scale, but for Madpixel CEO Iñaki Arredondo, the Mauritshuis had the edge. ‘The Mauritshuis offers the perfect combination of the ability to move quickly, tremendous content and openness to innovation,’ he said.

‘We were the lucky ones,’ Mauritshuis director Martine Gosselink told a press conference on Thursday, describing the new app as ‘a fantastic invention’.

The app comes at a time when many museums, hit hard by the Covid-19 pandemic, have been forced to find alternative ways to attract visitors. According to a survey by museum association NMV published earlier this month, 260 museums in the Netherlands risk closure within a year. In September, the Dutch government promised a further €482m for the cultural sector, on top of the €300m earmarked in April.

While the technology has an important role to play during the corona crisis, Gosselink sees the new app as a tool for broadening engagement longer term. ‘Some people cannot travel, for whatever reason, either they live far away or they are ill,’ she said. ‘But also for scholars and students … So many people study Dutch 17th century art, and for them it’s also very helpful too.’

Digitalising an entire museum is a world first, but the high-resolution technology is not new in the sector. In 2016, the Museum Boijmans van Beuningen in Rotterdam teamed up with the Google Cultural Institute to create gigapixel images of major works using Google’s ‘Art Camera’, while this May, the Rijksmuseum published the most detailed photograph ever of Rembrandt’s Night Watch.

Sandra Verdel, project manager for digital engagement at the Mauritshuis, sees the Second Canvas app as complementing, rather than replacing, a physical tour of the museum.

‘We are not afraid that less people will go to the museum – we are convinced it’s the opposite: everyone will want to visit the museum after this tour,’ she told DutchNews.nl.

‘Nothing beats seeing a Vermeer in real life, when you are standing in front of it. But at the same time, this tour gives you the opportunity to discover our collection in a whole new way.’