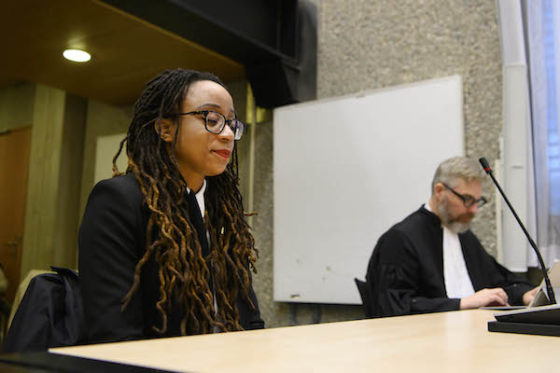 In total, 24 people have been sentenced to community service and fines of between €300 and €450 for discrimination and inciting violence against NRC columnist Clarice Gargard.

Thousands of people attacked Gargard online after she placed a livestream on Facebook of a protest against blackface at a Sinterklaas parade in Amstelveen in 2018.

In total, 200 of the 7,600 comments directed at the columnist were investigated.

Of the 25 people who appeared before the judge 18 were found guilty of inciting violence, and another three of discrimination. One suspect was sentenced for incitement to discrimination and one was found guilty of using insulting language. One person avoided sentencing because of a lack of evidence.

‘All suspects used abusive language and some were particularly insulting about black people,’ the court said. The comments, which had a ‘considerable impact’ on the columnist included death threats and calls to kill demonstrators. ‘Fortunately this did not happen but it could very well have spurred someone on to take action,’ the court said.

The public prosecutor said the outcome of the case showed that there are limits to freedom of expression and what those limits are.

The start of the trial was tumultuous, with public prosecution chief Jacobien Vreekamp taken off the case for a contentious decision not to prosecute rapper Akwasi who had said he’d kick a Zwarte Piet in the face.

The columnist was satisfied with the sentences, her lawyer Sidney Smeets told broadcaster NOS.

‘We are happy that the court made it clear that racism and discrimination have no place in the public debate and that these are serious offences which merit substantial penalties,’ Smeets said.

However, Smeets also said police and justice officials could have ‘acted quicker and more seriously’. He said Gargard had to select the messages herself and report them but that police should have investigated all the comments. ‘That would possibly have resulted in more prosecutions or perhaps a different selection.’