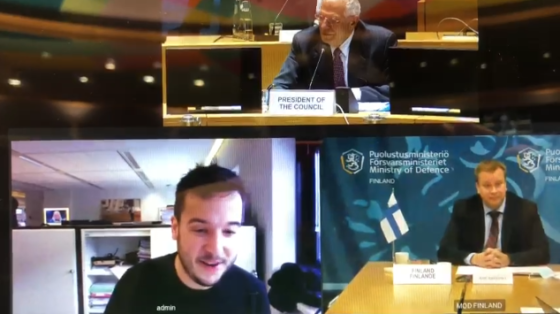 A still from the meeting video

A Dutch journalist with broadcaster RTL was able to join a video meeting of EU defence ministers on Friday by exploiting a security flaw.

Daniel Verlaan, who follows the technology beat for RTL Nieuws, joined the online gathering after an eagle-eyed observer spotted a photograph of defence minister Ank Bijleveld at the meeting, which included five of the six digits needed to access it.

He tipped off Verlaan who was easily able to work out the missing number and butted in, much to the bemusement of other delegates.

EU diplomat Josep Borrell, who was hosting the meeting, asked Verlaan who he was.

That ⁦@danielverlaan⁩ hack of the EU defence ministers’ meeting? This is how it looked from the inside. Comedy gold. pic.twitter.com/1qvVYKsDpt

‘I am a journalist from the Netherlands,’ Verlaan said. He then apologised and left the group after Borrell told him it was a secret meeting and that he had better go before the police arrived. ‘Goodbye and thank you,’ Borrell said as Verlaan left the chat.

Bijleveld is currently working from home in quarantine and had uploaded the photo to show she was working from her kitchen table. The photo has since been taken down.

An EU official told Politico.eu that the Council of Europe did not have ‘a secure space’ for communications equivalent to NATO’s platforms.

A Council official said the ‘intrusion’ was illegal and ‘will be reported to the authorities’.

Prime minister Mark Rutte said the mistake was further evidence of how careful ministers should be with Twitter.