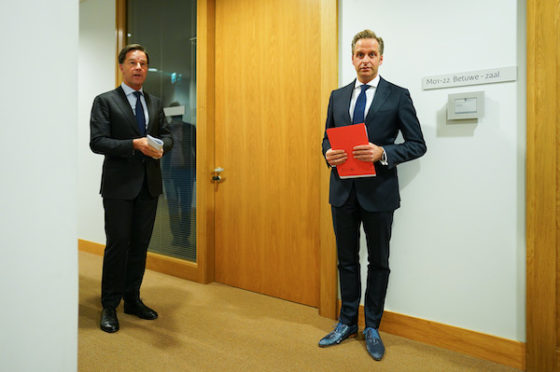 Cafes, bars and restaurants in the Netherlands are to be shut for at least four weeks from Wednesday 10pm in an effort to get coronavirus under control, prime minister Mark Rutte told reporters on Tuesday evening.

The measures, in total, amount to a partial lockdown, Rutte said. ‘The number of social contacts and movements we make has to be cut drastically,’ he said. ‘It is the only way. We have to be tough on ourselves and on our behaviour.’

The number of newly notified positive coronavirus tests in the Netherlands soared by a further 7,393 cases in the 24 hours to Tuesday 10am and there were nearly 44,000 newly registered cases of coronavirus in the past week.

‘Too many people are not keeping to the rules,’ Rutte said. ‘Then we have no choice but to take tougher measures to make sure that we can no longer meet each other.’

The government also plans to make face masks compulsory in all indoor public spaces, but that still needs to be worked out legally. ‘We want to prevent discussion about the measures,’ Rutte said. ‘We want people to stick to them.’

This is also why a ban on the sale of alcohol after 8pm is being introduced, Rutte said. ‘People were asking why cafes had to close at 10pm while they could still buy alcohol. So now we have dealt with that,’ he said.

The measures, described by Rutte as a hammer, would be assessed after two weeks to see if any progress is being made. ‘But they will last at least four weeks and if that does not help, then we will go into a total lockdown.’

Cannabis cafes will also be closed again, but can still open for takeaways, as can restaurants. Hotels can remain open but their restaurants are restricted to hotel guests.

Other new measures on the list include limiting group numbers to four, inside and outside and, Rutte pledged, enforcement will be stepped up. The rule limiting the number of visitors to three will be expanded to a 24 hour period, which means no more relay birth parties, Rutte said.

Team sports for adults in groups of more than four are also being halted and junior sports competitions are also being paused to stop people having to travel to away matches.

The situation in secondary schools will not change, but face masks are now ‘urgently recommended’ at colleges and universities when students are moving around. Once the law has been changed, they will be compulsory.

Shops will no longer be able to open in the evening, apart from food shops, and ministers are holding urgent talks with retail organisations to make sure the hygiene rules are properly followed and that shopper numbers are limited.

‘If we see things are not going well in a shop, then it can be shut down,’ Rutte said.

Ministers are also talking to employers and unions to make sure that more people work at home. Statistics from public transport companies and road users show that too many people are still travelling to work, Rutte said.

Ministers and health officials have now drawn up a road map outlining what measures need to be taken at what level so that this is ‘clear to everyone’ health minister Hugo de Jonge said.

‘We are currently at the highest level,’ he said. ‘This is very serious.’

Asked why the Dutch appear to be doing much worse than other countries, De Jonge said some people take the attitude that advice is something that does not have to be followed.

‘You have to do it. Let us stop debating about advice,’ he said. ‘The period of being without obligations is absolutely over.’