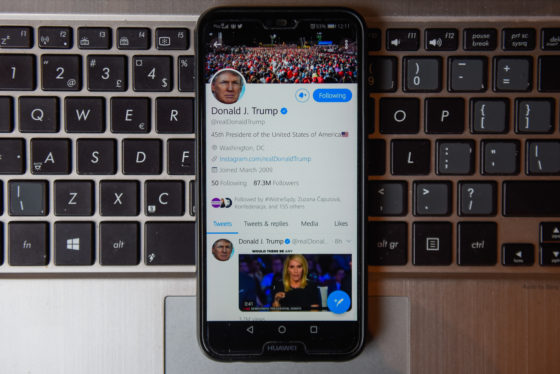 The VN account, also published in English, says that Gevers guessed Trump’s password was maga2020! in just seven attempts and that the president had switched off the two stage authentication process which should have been in place.

He also hints that he was the one to post the Babylon Bee tweet in Trump’s name and says that shortly afterwards, ‘he posted a tweet in his own name, tagging Trump and Team Trump, saying the Babylon Bee-tweet could now be removed, as it had served its purpose’.

The article details Gevers’ efforts to alert the White House, Trump and US security services to the fact that he has managed to access the account under ‘responsible disclosure rules’ but that it was not until the evening of October 20 that they finally contacted him.

But both US officials and Twitter say they have no evidence that supports the claims, and  Vice and several tech commentators have disputed the evidence provided by VN.

A screen shot purportedly showing Trump’s Twitter home page was missing the flag the president uses and would have been easy to fake, Vice tech news website Motherboard said it in its analysis of the claim. But others say the flag is not rendered in the edit mode and so would not have been seen.

This story is getting wilder and wilder. @twittersecurity needs to answer more questions. Including the ones I sent hours ago. https://t.co/CEf2WdZyGB

VN journalist Gerard Janssen, who broke the story, later responded on Twitter saying ‘Twitter says ‘no evidence’ which is kind of scary if you have seen the evidence I have seen.’