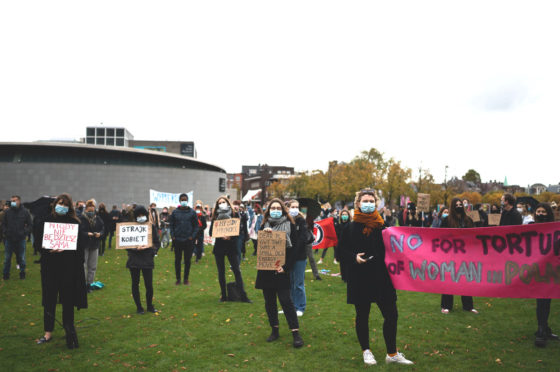 Some 250 Polish nationals gathered in Amsterdam’s Museumplein on Sunday to protest against the new restrictions in Polish abortion law, which make the country one of the most restrictive in the EU in terms of abortion rights.

A ruling last week by Poland’s highest court states that abortion in case of foetal dysfunction is unconstitutional, placing major limitations on the right to abortion and sparking protests across Poland since Thursday’s announcement.

‘When I read about this in the news, it was the first time in my whole life when I felt Polish,’ said Ola Samko, the organiser of the Amsterdam protest. ‘I felt like I needed to help the country, help the people.’ Her public Facebook event attracted more than 2,000 people within two days.

Students and workers at the demonstration said it allowed them to express solidarity with their home country. ‘I was glad that something was happening and that people unite despite being so far away from Poland, to join the cause,’ said Amsterdam university student Pola.

‘We’re here for our sisters and cousins who stayed in Poland,’ said Zosia, who was carrying a pro-choice sign. Other participants echoed her concerns. ‘It’s not even about women’s rights, it’s about human rights,’ added Natalia, also a student.

Gosia and her partner Lukasz brought their two daughters, aged 10 and 6. ‘We needed to come with the whole family because what is happening in Poland is cynical and cruel,’ Gosia said.

Several non-Polish participants also came to show their support. ‘I’m not Polish but I want to stand in solidarity with women in Poland,’ said Ezra, a Turkish student who lives in Amsterdam and was holding a sign saying ‘my body my choice’. Some protesters held signs in Dutch, such as ‘baas in eigen buik’ – the rallying cry of pro-abortion campaigners in the Netherlands in the 1960s and 1970s.

Dutch MEP Sophie in ‘t Veld said in a post on Medium that the Polish court ruling is ‘a page from the playbook that we know all too well from the United States, where abortion rights have been curtailed or suppressed, not through the deliberative democratic process, but by getting conservatives judges appointed to the Supreme Court.’

The European Commission, she said, must ‘have the courage’ to do more than make a technical assessment of institutional and procedural arrangements concerning judicial independence. ‘Europe has to wake up quickly. It is time to rise up and defend our European way of life,’ she said.

‘I hope the news about what is going on in Poland will spread more so that more people can be aware,’ said demo organiser Samko. ‘I also hope the EU will do something about this.’