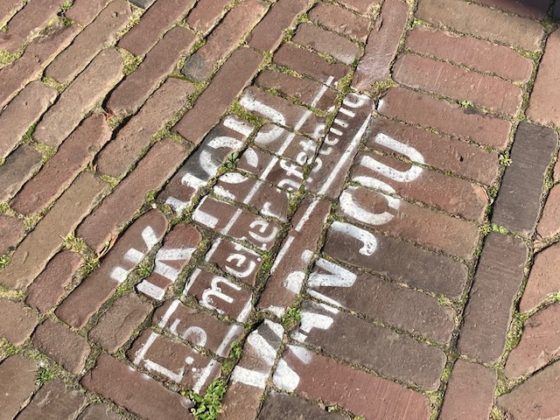 A reminder to keep your distance. Photo: DutchNews.nl

The number of new coronavirus infections registered with the public health institute RIVM soared by 5,831 overnight, a rise of over 800 on Wednesday, the agency has confirmed.

The increase takes the daily total well above the 5,000 which ministers said at last Friday’s press conference could be expected within the next few days.

As yet is is unclear if the sharp rise is due to a computer issue, as the RIVM’s systems were down for a time earlier in the week, and there is often a time lag between cases being reported.

In particular, there was a sharp rise in the number of positive tests reported in Rotterdam – up 422 compared with 326 on Wednesday, but in Amsterdam new infections were down slightly at 440.

The NRC said on Thursday that the Netherlands currently has more infections per 100,000 of the population than countries like the US and Brazil. Over the past week, 161 people per 100,000 have tested positive for the virus, and that is more than Spain, with 158.

The Dutch position cannot be put down to greater rates of testing, the NRC said, because figures from the European centre for infectious diseases show the Netherlands is average when it comes to tests, carrying out 1,150 per 100,000 people.

With 9% of tests proving positive, this is also well above the World Health Organisation’s guideline of 5%, which shows the epidemic is not under control. The percentage of positive tests is only higher in the Czech Republic, Hungary, France and Spain, the paper said.

However, the number of hospital admissions in the Netherlands, though rising, is still half that per head of the population as in France, and the death rate is also well below that of France and Spain, the paper said.

Hospital admissions rose by 49 overnight, taking the total to 1,070 patients, of whom 228 are in intensive care. The Netherlands has also asked German hospitals to be on standby to take patients should this become necessary.

Ernst Kuipers, head of the national patient coordination centre told reporters he expects 1,250 people to be hospitalised with coronavirus by the start of next week. ‘We must not allow ourselves to let this figure increase,’ Kuiders said, before describing Thursday’s new test figures as worrying.

The death toll also continues to rise but fluctuates widely, going up 13 on Thursday, compared with 36 on Wednesday. Over the past seven days, the death toll has averaged 16, up one on the previous week.