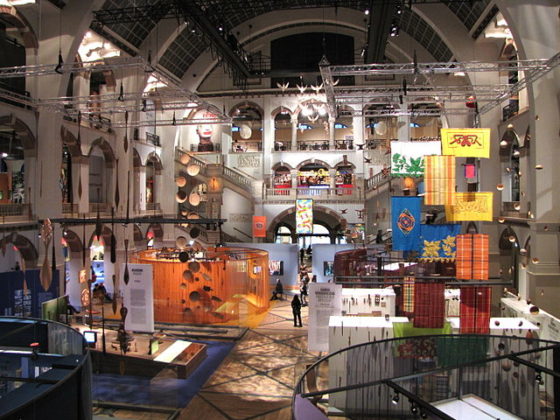 The Tropenmuseum in Amsterdam. Photo: Ziko via Wikimedia Commons

Many Dutch museum chiefs have said they will cooperate with the recommendation to return statues and other artefacts stolen during the colonial era to their countries of origin.

The Dutch Council for Culture said on Tuesday that as many as 100,000 objects, mainly from former colonies of Indonesia and Suriname, should be sent back, if requested.

Stijn Schoonderwoerd, director of the National Museum of World Cultures, which includes the Museum Volkenkunde in Leiden, the Afrika Museum in Berg en Dal and the Tropenmuseum in Amsterdam, said he hoped the minister would accept the recommendation. Together the museums have some 270,000 objects in their collections.

‘I don’t hide behind the state, but everyone should take responsibility’, Schoonderwoerd told current affairs programme Nieuwsuur. ‘We have here a number of 13th century Singosari statues from Java. They were standing next to a crumbling temple and the Dutch thought, they’re nice, we’ll have those. And now they’re here at the Leiden museum.’

Schoonderwoerd said he is not afraid museum collections will be depleted. ‘The council itself said that they were not given the impression by their contacts in Indonesia that it will be asking us to return hundreds of thousands of objects,’ he said. ‘The number will probably be limited.’

The Rijksmuseum has 4,000 objects with a colonial connection and none has ever been the subject of a request for return, mainly because there was no procedure in place for countries to turn to.

The return of objects that were not stolen but are of great cultural value is not something everyone agrees with. Leiden University professor Pieter ter Keurs said that particular paragraph in the report is ‘a slippery slope’.

‘The Dutch would also like to have artefacts from the Golden Age returned to them. It would be endless. I would say, please think about how you handle restitution very carefully,’ he said.

The minister has yet to respond to the council’s recommendations. The museum collections are owned by the Dutch state and it will have to decide to return the objects.

‘It is our task to investigate the origin of the pieces and work closely with the countries involved so we know what is important to them about the objects,’ Schoonderwoerd said.