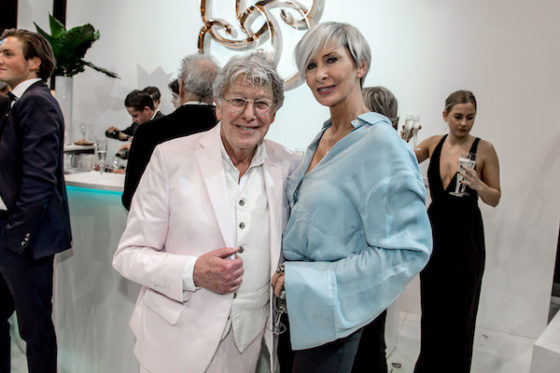 Furniture designer Jan des Bouvrie, who is credited with changing the Dutch attitude towards interior design, died at his home in Naarden on Sunday, aged 78. He had been suffering from prostate cancer for a number of years.

Des Bouvrie, whose parents had a furniture shop, studied at the Rietveld Academie in Amsterdam and then set up as an independent furniture maker. In 1969 he designed the Kubusbank (cube sofa) which brought him his first big success. The sofa became part of the Stedelijk Museum’s collection in 2004.

His most famous contribution to Dutch homes was to make them light and airy. The dullness of brown interiors, which had been prevalent, was replaced by his signature white furniture. White remained his favourite colour, even down to his clothes. ‘I was born in a little room above a shop with no windows. I have always sought the light,’ he said about his preference.

Des Bouvrie, who also gained popularity through his own television shows and relentless self-promotion in the 1990s, said his designs were ‘for rich and poor’ but it was his work for the well-heeled in their Wassenaar villas which made him the very rich man he always proclaimed to be. A spat with the tax office was settled out of court. ‘I don’t do black’, he said at the time.

A trip to his shop and restaurant Het Arsenaal in Naarden, a former military building from the 17th century, quickly became a favourite Sunday outing for those with deep pockets.

De Bouvrie designer said he did not see himself as an artists but as a craftsman. ‘I am not in the business of making sofas you can’t sit on’, he said.