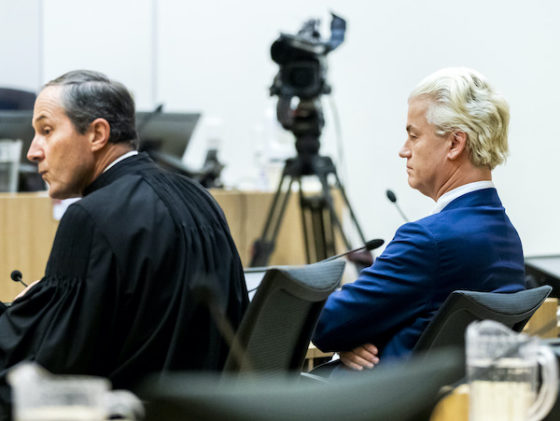 Dutch far right politician Geert Wilders has again been found guilty of group insult for  leading a crowd in an anti-Moroccan chant at an election rally in 2014, but the PVV leader was found not guilty of inciting hatred or discrimination.

Appeal court judges at the Schiphol airport high security court said on Friday that Wilders deliberately insulted the Moroccan people with the pre-orchestrated chanting in front of television cameras, and that this was exactly what he intended.

While politicians should be able to make statements which can be seen as shocking and upsetting, ‘a politician also has special responsibilities, and freedom of speech has limits,’ the court said.

The verdict is a partial victory for the PVV leader, who was found guilty on the counts of insulting a group of people and of racial discrimination by a lower court in 2016. He was also found not guilty of inciting racial hatred in that ruling.

As in the previous case, the court said Wilders would not face any punishment because he is already paying a high price for his comments as a democratically chosen politician.

Wilders and his legal team have consistently described the trial as political, and the appeal at times focused more on his claims of interference by the justice minister of the day, than on the chanting itself.

‘The Netherlands is a corrupt country,’ Wilders told reporters after the hearing. He also said that he plans to appeal.

Despite the emergence of emails showing that senior ministry officials kept abreast of progress and made suggestions about how the case should proceed, the public prosecution department has been adamant that it was not influenced and made its own decisions.

The court in its ruling said that it had been up to the department, not the ministry, to press ahead with the prosecution.

The crime of groepsbelediging, or group insult, means deliberately insulting of a group of people because of their race, religion or conviction.