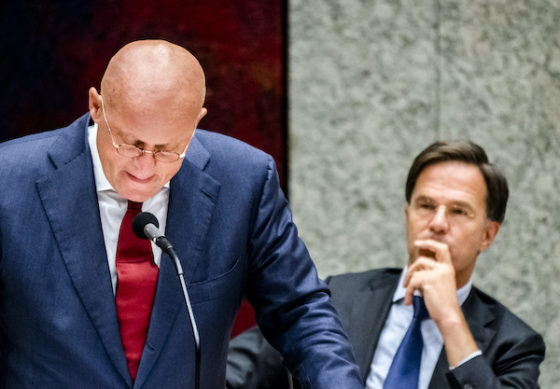 Justice minister Ferd Grapperhaus has not been forced to resign by MPs despite the publication of a string of photos showing him and fellow guests not following social distancing requirements at his wedding last month.

A motion of censure against the minister was supported by the entire opposition apart from the fundamentalist Christian SGP but this was not enough to force Grapperhaus to resign. A motion of no confidence won less support.

Grapperhaus came under fire from all parties for damaging his credibility – especially given that he is in charge of the justice ministry’s role in tackling coronavirus and has described people who break the 1.5 metre rule as ‘antisocial’.

In particular, Grapperhaus’ actions have undermined the government’s strategy to deal with coronavirus, MPs said. ‘You sense that he will have less authority to talk to people,’ Labour leader Lodewijk Asscher said.

Others said his actions were a slap in the face to everyone who had postponed their own wedding because of the social distancing rules.

Apologising for his actions for the second time, Grapperhaus said he had prepared the wedding according to the rules, but has been ‘carried away’ on the day itself. ‘It did not go well,’ a visibly emotional Grapperhaus told MPs during the debate.

Ministers have now agreed to MPs’ demands that they look again at the way a fine for breaking social distancing rules automatically results in a criminal record.

This makes it difficult for people to get a certificate of good behaviour (VOG), which is required in many jobs.

Thousands of people have been given a fine of €390 for breaking the social distancing rules and several thousand have already begun appeals.