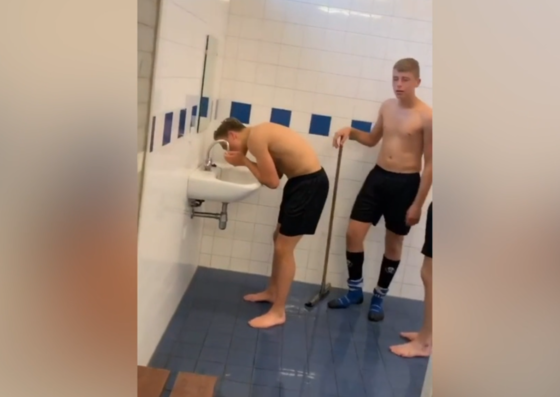 A Dutch teenage football team has gained worldwide attention, after their TikTok video of the group dancing to a Bollywood song in their locker room went viral.

The teenagers from Bladella O19, in the North Brabant town of Bladel, posted their contribution to the current Break Your Wrist challenge on the social media site over the weekend and the clip has since garnered more than four million views.

Incredibly popular with teenagers, TikTok allows users to share short video clips and one common trend is to share TikTok dances where users recreate a dance with their own spin.

Also known as the Sadi Gali challenge, the Break Your Wrist dance trend features a person doing an activity, in Sambeeck’s case slipping on the locker room floor, in which they pretend to injure their wrist. It then morphs into a group dancing with a wrist twist move familiar to anyone who has seen a Bollywood movie.

Sadi Gali is the name of the song which accompanies the dance. Sung by Lehmber Hussainpuri, it’s from the movie Tanu Weds Manu, which was released in 2011. The song has had a resurgence in popularity since the dance trend emerged on TikTok.

Sambeeck’s video was re-posted by a popular football accountant, which helped boost its popularity.

The teenager increased his own following ten fold and has since been recognised on the street by people who have seen him online. ‘We have already received a few messages about possible sponsorship deals,’ he said.