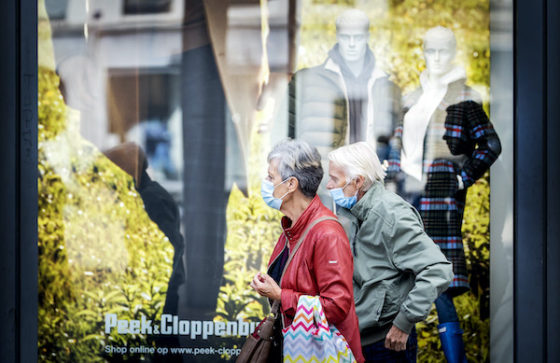 Dutch retail organisations say they will not tell their members to force customers to wear face masks in shops, saying the government should bring in national legal requirements instead.

On Monday, the mayors of the cities of Amsterdam, The Hague, Rotterdam and Eindhoven said they would strongly recommend people wear masks in shops, cafes, government buildings and museums in an effort to stem the spread of coronavirus.

However, face masks cannot be made compulsory because it would be ‘legally difficult’, Amsterdam mayor Femke Halsema said, when she outlined the plans.

Retail organisations now say the lack of legal backing will make wearing masks impossible to enforce and lead to endless discussions with customers.

‘We are not going to refuse people entry at the door,’ Jan Meerman, director of shopkeepers association InRetail, told BNR radio. ‘One shop might take a tough line, the next one won’t. Customers won’t understand what is going on and it will lead to discussions, even worse, in shops.’

Instead, shopkeepers would prefer it if masks were made a legal requirement, as in other countries, he said. ‘It works there,’ he said.

Supermarkets too say they will leave the decision up to customers. And while they will recommend staff wear masks, it will be up to them to decide whether or not to do so.

‘If shops make face masks a requirement, it will lead to extra discussion, even aggression, at the door,’ the CBL said in a statement.

InRetail and small business association MKB are meeting ministers later this week to discuss the face mask issue. ‘A shopkeeper or a mayor cannot force people to wear a a mask,’ Meerman said. ‘It has to be organised by national government. Now shopkeepers are being saddled with the issue, and that is not the way it should be.’

A number of retail chains, including Hema, Blokker and Intertoys have already said they will not refuse customers who do not wear a mask. The Bijenkorf department store group has said it will require them in the four cities where coronavirus cases have risen most.

Health minister Hugo de Jonge has not yet commented on the debate, describing the wearing of face masks in shops as a recommendation.

It is unclear what legal objection to making masks compulsory Halsema was referring to. Masks are already required on public transport. And this summer, a court in Amsterdam ruled that the city was not contravening citizens’ basic rights by asking them to wear face masks in busy areas of the capital in a month long experiment.

The court in Amsterdam ruled that it was a relatively minor violation of personal rights, and so was allowed under emergency coronavirus prevention laws.

MPs have also criticised the lack of clarity about the masks advice. SP leader Lilian Marijnissen said it is unfair that shopkeepers have been charged with enforcing voluntary regulations. ‘We need a clear strategy with uniform agreements,’ she said.

There were also divisions within the government’s Outbreak Management Team about the wisdom of bringing in more regional measures. ‘I think you should have done this [recommended face masks] nationally, not just in the big cities,’ OMT member Andreas Voss told broadcaster NOS.

US virologist and president Trump advisor Antony Fauci told current affairs programme Nieuwsuur on Monday night that there is now sufficient information suggesting masks do have an impact on preventing the spread of the virus. ‘Whatever the country, I would seriously recommend people consider wearing masks to prevent the spread,’ he said.