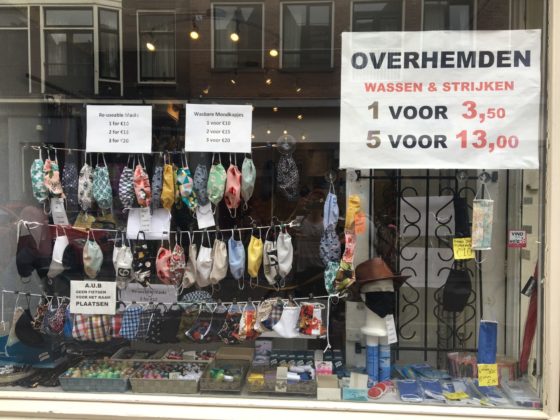 The mayors of Amsterdam, Rotterdam, The Hague and Eindhoven have made a plea to people to start wearing face masks in shops and all public places, following the government’s new coronavirus restrictions announced on Monday night.

While prime minister Mark Rutte said at the press conference supermarkets in Amsterdam, The Hague and Rotterdam would be asked to require customers to wear masks, Amsterdam mayor Femke Halsema went one step further later in the evening, making an urgent appeal for mask wearing in all indoor public spaces.

Halsema, who said she was speaking on behalf of Rotterdam, The Hague and Eindhoven, said the recommendation to wear masks would apply in cafes, restaurants, museums, libraries and all government buildings.

‘We want it to be taken as read that you will wear a mask indoors in our regions,’ she said. However, face masks cannot be imposed by law, and the recommendation remains advisory, Halsema said.

The move comes a month after Amsterdam and Rotterdam stopped an experiment requiring people to wear masks in busy places, including the capital’s red light district. The requirement was widely ignored, despite the threat of a fine and did not make people more likely to keep 1.5 metres apart as officials had hoped.

The RIVM public health institute remains sceptical about how effective non-medical face masks are in preventing the spread of the coronavirus in public places and has continually emphasised the importance of limiting the size of social gatherings and keeping a 1.5 metres distance.

Nevertheless, the Hague’s mayor Jan van Zanen said later that although the use of masks is advisory ‘ there is little that is optional’. ‘If we do not manage to improve our position within three weeks, the measures will get tougher,’ he said.

Eindhoven’s mayor John Jorritsma said in a reaction that he believes it is useful to wear face masks in places where many people come together, such as supermarkets, DIY stores and garden centres. ‘This is not for medical reasons, but because of the signal it gives off,’ Jorritsma said.

Rotterdam mayor Ahmed Aboutaleb told the AD that he wanted to see masks worn in more places than just supermarkets and on public transport. ‘This should be a recommendation to everyone and in all places where lots of people meet. Think  museums and local council offices,’ he said.

MPs have also criticised the lack of clarity about the masks advice. SP leader Lilian Marijnissen said it is unfair that shopkeepers have been charged with enforcing voluntary regulations. ‘We need a clear strategy with uniform agreements,’ she said.

There were also divisions within the government’s Outbreak Management Team about the wisdom of bringing in more regional measures. ‘I think you should have done this [recommended face masks] nationally, not just in the big cities,’ OMT member Andreas Voss told broadcaster NOS.

US virologist and president Trump advisor Antony Fauci told current affairs programme Nieuwsuur on Monday night that there is now sufficient information suggesting masks do have an impact on preventing the spread of the virus.

‘Whatever the country, I would seriously recommend people consider wearing masks to prevent the spread,’ he said.

Meanwhile high street staple Hema has already said it will not ban customers who do not wear a face mask. It is not up to shops to enforce such measures, a spokesman said.