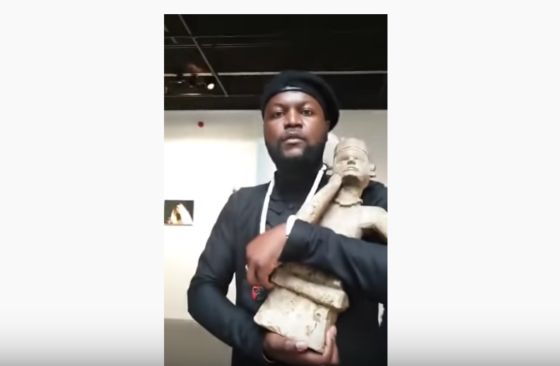 Five French-speaking activists have been arrested after trying to steal a Congolese statue from the Afrika Museum in Berg en Dal.

The five live streamed a long video on YouTube entitled ‘recovering our heritage’ saying that they were repatriating a religious statue which had been ‘stolen’ from Africa, filming themselves taking it from a display and walking out with it.

A police spokesman told DutchNews.nl that the two men and three women, of no fixed address, were arrested on Thursday afternoon and are still in custody. ‘The image is back in the museum, although they did steal it,’ said the spokesman. ‘They may not have intended to keep it but may have been sending a signal.’

In the 22-minute long film on YouTube, the five take the statue, walk out of the museum, are unable to drive out of the car park because the barrier is lowered, and then carry on walking until police arrest them and handcuff a man dressed all in black with a beret.

In a long monologue, he claims that the works in the museum were African items of faith stolen by the ‘Dutch and Portuguese’ from Africa, during times of colonisation and slavery when evangelists were spreading the Christian faith.

He says that their confiscation was part of colonial repression, stopped Africa from developing a textile industry and helped destroy the African identity. In the video, he says repeatedly that he is taking home a religious symbol which ‘enriched Holland and the West’.

‘Dear compatriots, brothers and sisters…We are here in the Afrika Museum in Berg en Dal in the Netherlands,’ the video begins. ‘This museum was created during the 1960s and all of the pieces and works that are here were stolen from Africa under colonisation and slavery…We never ask the thief for his permission to take back what he stole and this is why we have come to take back the soul of Africa: our soul. We have come to take back what was stolen from us, the symbol of Africa’s power, Lemba, the guardian of peace.’

Others are heard shouting ‘Free Africa’ during the video, while museum staff are apparently heard saying ‘hello’ as the group walks out with the statue. The man also complains in the video several times that to enter the museum they had to pay €15 each. Under the posted video, a text accuses the museum of stealing 450,000 items from Africa and pledges to take them ‘home’.

Stijn Schoonderwoerd, director of the museum, told NOS Radio 1 Journaal that he was happy that there was no violence and that the statue was back. ‘It could have ended in a scuffle, but the image is not damaged,’ he reportedly said. ‘The activist in question claimed that he is from the same culture [as the Congolese image] and that it belongs to him. These people wanted to make a statement.’

He reportedly added that the museum does contain goods known to be stolen. In a press release, the museum said that the activists have carried out similar stunts in Paris and Marseille and are being prosecuted in France.

Dutch prosecutors are still deciding whether or not to press charges.