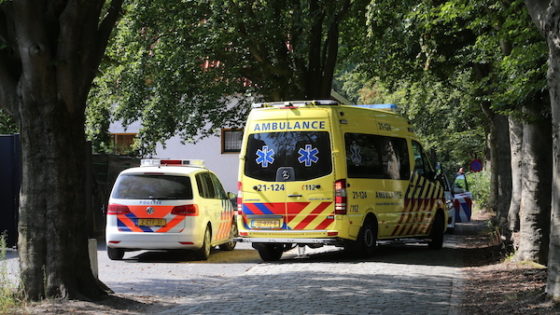 The emergency services outside NikkieTutorial’s home. Photo: ANP AS MEDIA

Dutch YouTube star Nikkie de Jager has been robbed at her home in Uden at gunpoint, the make-up artist has confirmed on Instagram.

The home which she shares with partner Dylan Drossaers was attacked by at least three men at around 4pm on Saturday, local Brabant police reported. Details of what actually happened are sketchy and no-one has said what the robbers got away with.

‘One of my biggest nightmares became a reality,’ De Jager, better known as NikkieTutorials, said on social media. ‘Physically we are okay, mentally it is a whole other story.’

Local broadcaster Omroep Brabant said the gang made off in a beige car in the direction of the A50. All three were wearing hoodies and, according to the police, should not be approached if spotted.

This January De Jager went public with the news she is transgender and underwent realignment therapy in her teens, hinting heavily that she made the public admission because she was being blackmailed.

De Jager, 25, has 13.5 million followers on You Tube. She began uploading make-up videos in her early teens but hit the big time in 2015 when her YouTube video The Power of Makeup went viral.