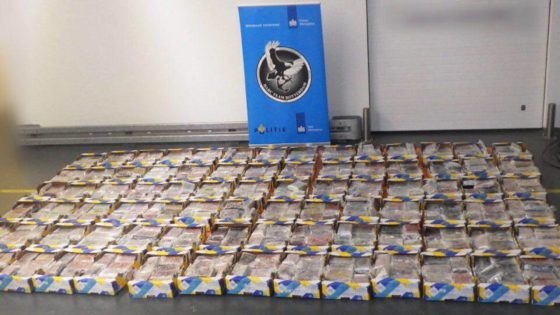 Police and customs officials have seized nearly three tonnes of cocaine hidden in three shipments of pineapples and bananas at Rotterdam port over the past three days.

On Sunday night, they seized a tonne of the drug hidden in a container of pineapples from Costa Rica. The consignment was heading for a company in Barendrecht which probably knew nothing about the drugs, police said.

On Saturday officials found 1.1 tonnes of cocaine in a shipment of bananas from Equador. Last week they had also found 743 kilos of the drug in another banana shipment from the South American country.

The total street value of the drugs is around €213m, officials said.

Customs officers seized twice as much cocaine in the first six months of 2020 than in the same period last year. More than 25 tonnes of the drug were intercepted in the Netherlands between January and June, compared to 12,000 in the first half of 2019,

In April, 4,500 kilos of cocaine were found in a container of bananas from Costa Rica, in one of the largest drugs hauls ever recorded in the Netherlands. Rotterdam and Antwerp are known to be two of Europe’s main hubs for the international illegal drugs trade.