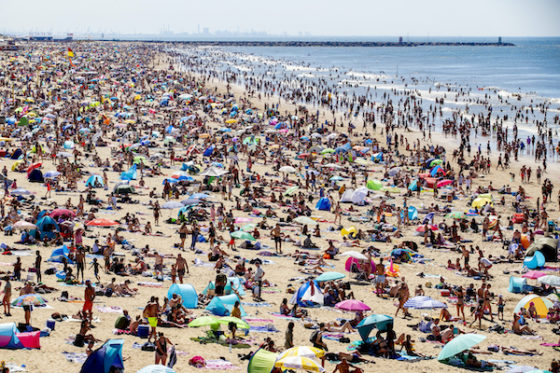 Local health board officials have closed three cafes in Amsterdam because of coronavirus – two because they were potential sources of clusters and one because a member of staff continued to work with symptoms.

Amsterdam and Rotterdam are currently the main centres of infection in the Netherlands, and both cities plan to make face masks compulsory in busy areas from next week.

Officials also fear a rise infections may follow this weekend’s Eid celebrations among the Muslim community, and Rotterdam’s mayor Ahmed Aboutaleb has urged people to stay home and celebrate in smaller groups.

Other local clusters have been traced back to cafes, including 23 infections stemming from a café in Hillegom, south of Haarlem, and a student gathering in Rotterdam. Officials in Utrecht have also fined a cafe owner after eight clients developed Covid-19 after holding birthday drinks on the premises.

So far, 133 clusters have been identified, according to figures quoted by Trouw. The number of coronavirus infections in the Netherlands may be increasing – 338 on Friday alone – but there is no reason to panic, Diederik Gommers, head of the Dutch intensive care association, told the AD in an interview.

Hospital admissions are low and there are few people in intensive care, Gommers told the paper. ‘If youngsters [who have been testing positive in greater numbers] keep away from their parents and grandparents, the damage can be limited,’ Gommers said.

‘In the Netherlands we had some 50 to 100 new infections a day and we should see that as a constant,’ he said. ‘Now we are seeing clusters on top of that, thanks to parties, barbecues, student events and religious meetings. All those potential sources need to be researched and kept under observation.’

Yet although ministers and government experts have claimed most infections can be traced back to private gatherings with friends and family, in 60% of positive tests the source of the infection has not yet been identified, figures from the public health institute RIVM show.

Statisticians have also pointed out that the original source of a cluster infection is also often unknown.

‘If someone is found positive today and has commuted to work by train for the past two weeks, has been to the supermarket and to visit his brother, then it is difficult to trace the source,’ epidemiologist Amrish Baidjoe told Trouw.

Last week Baidjoe, who has been highly critical of the government’s position on face masks, called on the government to invest more in tracing the potential sources of infections, saying it is ‘completely unacceptable’ that it can take up to six days to get in touch with contacts after a positive test result.

The NRC also points out that the ease of actually getting to a testing centre varies enormously nationwide. In Groningen and parts of West Brabant, for example, people have to drive more than 30 minutes to reach one of the government’s drive-in test locations.

But while Groningen has had relatively few cases of coronavirus, West Brabant is hemmed in by three areas where there have been new outbreaks – in Rotterdam, Goes (Zeeland) and Antwerp.

The long distances – and lack of access to people who do not have a car – mean more people are being tested by their family doctors, the NRC said.