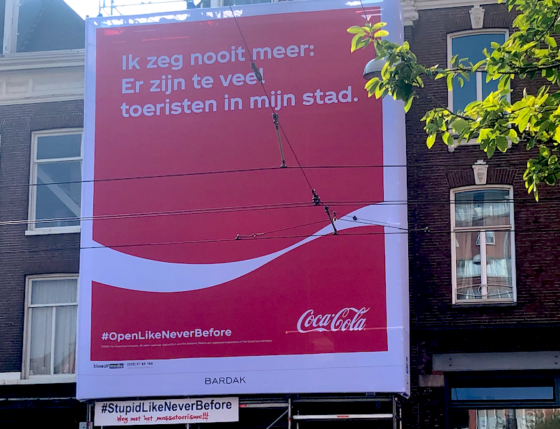 Coca-Cola is removing a large pro-tourism advertising banner from scaffolding on the Marie Heinekenplein in Amsterdam, after a storm of criticism from locals.

The banner reads ‘I will never again say: there are too many tourists in my city’, a slogan which has not gone down well with residents’ organisations and some local politicians, now that tourists are returning in the wake of the coronavirus lockdown.

‘Weed and alcohol tourists are back in force and we have a lot of problems in the Pijp,’ she said. ‘We are not against tourism in principle, but we are against loud, mass tourism, and then Coca-Cola comes with this. Inappropriate.’

Coca-Cola told DutchNews.nl that the decision to remove the ad had been taken ‘straight after we saw the comments of the neighbours themselves.’ The campaign is part of a wider approach based on the belief that ‘we don’t have to go back to ‘normal’, but that we can move forward, together, change the world,’ the spokeswoman said.

‘As a marketer you want your message to appeal to people, connect them to your brand and make people think in a positive way…  we believe in listening and adjusting and that is why we have decided to remove this specific ad today, instead of after the initially planned period of two weeks,’ she said.


Local Socialist councillor Tiers Bakker described the advert as a ‘slap in the face’ for locals and said the size of the banner was ‘pollution in a public place’.

Large banners on scaffolding have been banned in several parts of the city, but not yet in Zuid, where the Coca-Cola advert is.

Note: This article was updated on Thursday to reflect comment from Coca-Cola.