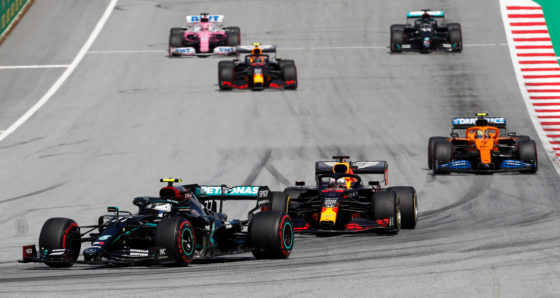 Verstappen tucks in behind Valtteri Bottas at the start of the race. Photo: Darko Bandic/ANP

Max Verstappen’s hopes of a winning start to the Formula One season were dashed when technical failures forced him to retire from the Austrian Grand Prix.

Verstappen, twice a winner on the Spielberg circuit, started in second place ahead of world champion Lewis Hamilton, but problems with his Red Bull’s anti-stall mechanism ended his race on lap 11.

‘I should have at least scored a podium finish. I’m gutted, it’s not good, but what can I do?’ he said afterwards.

Hamilton was demoted from second to fourth after the race after being penalised for colliding with Verstappen’s team-mate Alex Albon towards the end.

Verstappen will hope for a smoother run next week in the second race of the season, which is also being held in Austria.

The Dutchman was one of six drivers who declined to kneel before the race in support of the Black Lives Matter. Hamilton, who organised the silent demonstration, wore a BLM T-shirt while other drivers displayed the slogan End Racism.

I am very committed to equality and the fight against racism. But I believe everyone has the right to express themself at a time and in a way that suits them. I will not take the knee today but respect and support the personal choices every driver makes #WeRaceAsOne #EndRacism

Verstappen insisted on Twitter that he was ‘committed to equality and the fight against racism’. But his decision was criticised by some sporting figures including national football team coach Ronald Koeman, who said he ‘didn’t understand’ why some drivers opted not to take part.

‘It surprises me,’ Koeman said on Studio Sport. ‘Isn’t that something you discuss with each other? In England we’ve seen football teams kneeling. It would be bizarre, wouldn’t it, if three or four players stayed standing?’