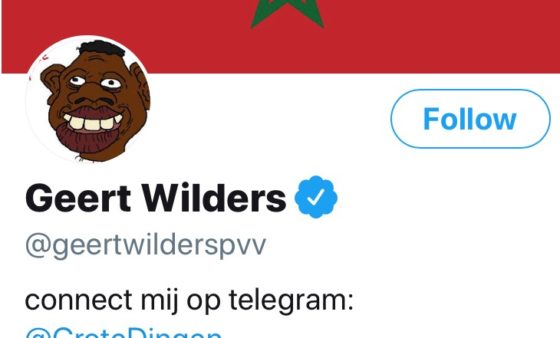 A hacker has broken into the Twitter account of far-right politician Geert Wilders, replacing his photograph with a caricature of a black man and the background with a Moroccan flag, then re-tweeting a series of conspiracy theories.

The hacker, who has reportedly been in touch with Dutch media but has not been named, told an NPO 1 radio show that he and others thought that Wilders ‘goes too far with his comments, especially about Moroccans and Muslims.’

He said he did not belong to these groups ‘but have a lot of sympathy for these people.’ He also claimed to have access to private messages sent to the PVV politician and said the hack was related to a mass hack of leading Americans on Thursday.

A spokesman for Wilders told NOS that he found the attack very annoying, and has asked Twitter to block the profile. ‘Hopefully it will deliver us new followers amongst my Moroccan friends,’ he reportedly added.