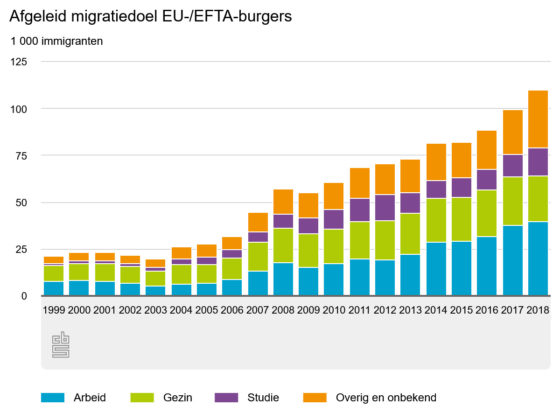 Most immigrants to the Netherlands come from Europe and leave within 10 years, according to a study by Dutch statistics office CBS.

In 2018 – the latest year for which there are figures – 191,000 people of non-Dutch origin came to the country. Work was the most important motivation for the 58% of them who came from Europe, the study found.

Of the total number of EU immigrants, 40% came to the country to work, while other motivations were to join family members, study or claim asylum. Historical figures suggest that although migration from the EU and countries in the European Free Trade Association has increased every year since 2009, so have the numbers of people who come to the Netherlands to work.

The total number of migrants peaked in 2016, but the numbers coming to the Netherlands to work have also steadily risen since 2009, while the amount of asylum seekers has shrunk dramatically in recent years.

Three quarters of all work migrants who came to the Netherlands in 1999 and 2009 returned to their own countries within 10 years, the study found. More than 70% of those from EU or EFTA countries who arrived in 2009 had left within a decade, and 54% of immigrants from other countries had too.