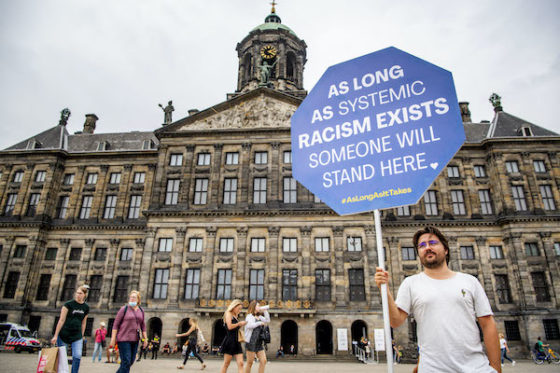 There is an ongoing anti-racism demo on the Dam in Amsterdam. Photo: Robin Utrecht via ANP

Companies which discriminate against people on the grounds of race, sex or religion when recruiting new staff face a fine of up to €4,500 and being publicly shamed, if new legislation drawn up by the social affairs ministry is passed by parliament.

The legislation is aimed at tackling inequality on the jobs market, and comes after several surveys have shown that discrimination is still an major issue.

The legislation will require companies to draw up policy to ensure equal opportunities. Companies which fail to do so, or which do not do enough to combat discrimination, will face a fine of €450 for a firm with a workforce of up to five people, rising to €4,500 for large companies.

Companies which fail to improve also face being named and shamed, the minister said.

A recent survey of some 2,000 HR professionals for consultancy Berenschot found that just 20% of companies have an active strategy on diversity and 60% don’t focus on the issue at all.

In 2018, researchers for television current affairs show Radar found that many temporary employment agencies are willing to discriminate against people with an ethnic minority background if requested to do so.

Almost half of 78 temporary employment offices phoned by journalists about jobs for a fictional call centre were willing not to send candidates with a Turkish, Moroccan or Surinamese background.

Social affairs ministry inspectors also reached similar conclusions last year after placing 707 fake cvs online and in jobs banks. While there was no difference in the reactions generated on the basis of sex or age, there was a ‘significant’ difference in the reactions received between minorities and the native Dutch, the ministry said at the time.