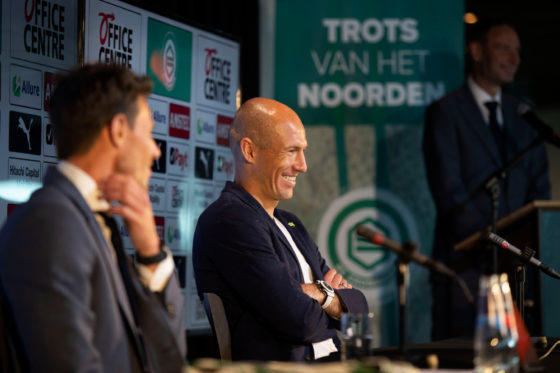 Arjen Robben will wind down his illustrious career in Groningen after he signed a one-year deal with his home town club.

The 36-year-old winger spent the last decade at Bayern Munich, winning eight Bundesliga titles and the Champions League trophy in 2013, when he scored the winning goal and was named man of the match.

Robben’s career has been blighted by a string of injuries which meant he played just 12 games in his final season at Bayern. His contract at Groningen includes a clause that states he will only be paid if he is fit to play.

Robben said he had agreed to the condition to avoid letting down the fans. ‘Obviously I’m looking at a comeback, but to begin with it’s an attempt at one.

‘To prevent disappointment for everyone: it could be anything from nothing to loads of games. But I’m feeling positive.

‘If I have to sum it up in one word it’s clubliefde [love for the club]. That’s why I’m doing this. I wouldn’t have done it for any other club.’

Robben left Groningen in 2002 for PSV Eindhoven before signing for Chelsea three years later for €18 million. In 2007 he moved to Real Madrid for a fee of €35 million, but two years later he was offloaded to Bayern for €25 million.

He also played 96 times for the Dutch national team, scoring 37 goals, including two in the 5-1 win over Spain in the team’s opening 2014 World Cup game.