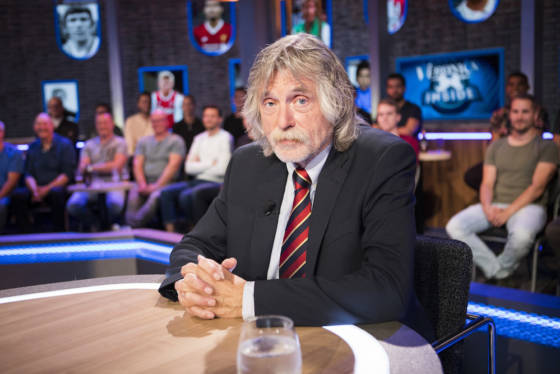 The Dutch national men’s, women’s and youth football teams have said they will boycott a popular television sports programme because of racist comments made by one of its football pundits.

A number of players have published a statement on social media saying they will no longer be interviewed on Veronica Inside because of the comments by Johan Derksen, who likened a Black Lives Matter campaigner and rapper to the blackface character Zwarte Piet.

‘This is way beyond the limit,’ the statement said. ‘It is not for the first time and not for the second… enough is enough.’

Football analyst Derksen, 71, made the comment about a pro-Piet campaigner in full blackface at the recent anti-racism demonstration in Groningen. ‘How do we know that is not Akwasi,’ Derksen said, referring to the campaigner.

A spokesman for the Talpa television network which broadcasts the programme said that the comments are ‘up to the people’ at the table. ‘Veronica supports freedom of speech and opposes the deliberate insult of people or population groups.’

National coach Ronald Koeman said he had discussed the issue with Van Dijk before publication and that the move had his full support.

‘The players see how others are regularly insulted or made to look ridiculous,’ he told the AD. ‘It is always dismissed as harmless “pub talk”, but it goes too far.’

On Friday broadcaster NOS said a number of companies which advertise in or around the programme were rethinking their strategies.

Brewing group Bavaria, one of the main sponsors of the show, issued a statement saying Derksen’s comment was ‘not a joke and is a step too far’. The sponsorship contract ends this month and will not be renewed, although this decision was taken before Derksen’s latest comments, the spokesman said.

Other companies which advertise around the programme, including fruit company Zespri, bookies Toto and telecom firm KPN said they were in talks with Talpa.

Not the first time

In the past Derksen has said a black tv presenter and anti-Zwarte Piet campaigner would be ‘running around as a proud as an monkey’, a comment he later apologised for.

He has also come under fire for describing two men who launched a petition to make football more gay-friendly as ‘two young, hysterical little gay men’ and saying that having too many Moroccan players is spoiling amateur football.