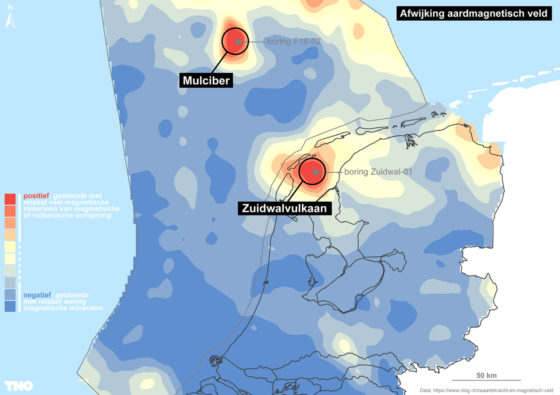 The geological department of the Dutch research institute TNO has discovered a dead volcano three kilometres below sea level, some 100 kilometres north west of the Wadden island Texel.

The newly found volcano, which was named Mulciber after the Roman god of fire and is 150 million years old, was found when scientists were reviewing old geological data of the North Sea on behalf of energy companies in search of gas beneath the ocean floor.

What gave the presence of the volcano away were a number of anomalies in the structure of the subsoil and the earth’s magnetic field, geologist Michiel van der Meulen said.

Fifty years ago similar changes led to the discovery of  the Zuidwalvulkaan, another dead volcano in the Wadden Sea. Van der Meulen said, the North Sea may well hide more. The tally for Dutch volcanoes is now four, including Mount Scenery on Saba and Quill in St Eustatius. Both Caribbean islands, part of the  former Dutch colonies in the area, have the status of a Dutch local authority.

Van der Meulen called the discovery a one off. ‘How many times in a geologist’s career do you get to find and name a volcano? Studying the North Sea and the geological sediments in it is like reading an great book. We think we know the gist of the story but every time we go back to it we get to know the protagonists and the story lines better. In that sense this discovery adds to what we already know about our living environment,’ Van der Meulen told broadcaster NOS.

The data revisited by Van der Meulen and his team dates from the 1980s. ‘The geological data gathered as a result of exploratory drilling by companies always comes to us. It would cost billions to do it all again so that is why we have this treasure trove.’

The information is of enormous value for the future of sustainable energy, Van der Meulen told the broadcaster. ‘Old data which aimed a pumping up gas and oil can now be used for geothermal energy or CO2 storage research,’ he said.