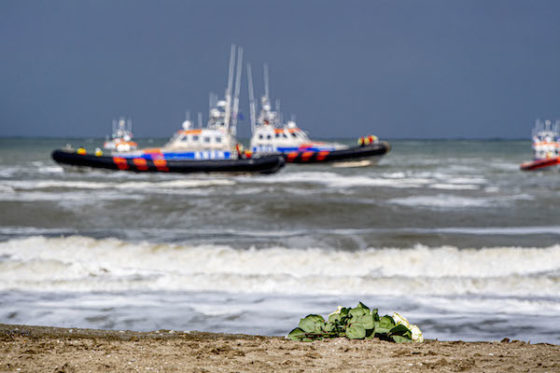 White roses on the sand at the spot where the surfers died. Photo: Robin Utrecht / ANP

Rescue workers looking for missing surfers have spotted a fifth body in the sea off the coast of Scheveningen, but have not yet been able to recover it, police confirmed on Tuesday afternoon.

At least five surfers are now known to have died in yesterday’s accident after strong winds and thick layer of sea foam apparently caught the group off guard.

Two bodies were found earlier on Tuesday morning and two others died after being pulled from the sea on Monday evening. According to some reports, several of the group may have been body surfing, without boards. Others said they were preparing for the start of the surfing season.

The surfers were experienced and include two surf school instructors, broadcaster NOS said. Both men and women are among the dead. Some of them also worked as life guards, according to the Telegraaf.

The Hague mayor Johan Remkes told reporters at a press conference that a thorough investigation into what happened would now take place. ‘How can it be that people with so much experience and who knew this place so well came to die,’ Remkes said.

In total, 10 people are thought to have been in the water at the time, a group of six, a group of three and one single surfer. Three of those who died came from The Hague, the other two from Delft, one of whom is still missing.

At the weekend, a 28-year-old man from Den Bosch was killed while out kite surfing off the Zeeland coast. Officials say he appeared to have been caught up in strong winds and was dashed against the concrete post of a beach house.

Note: This article was updated on Tuesday afternoon to reflect the afternoon press conference