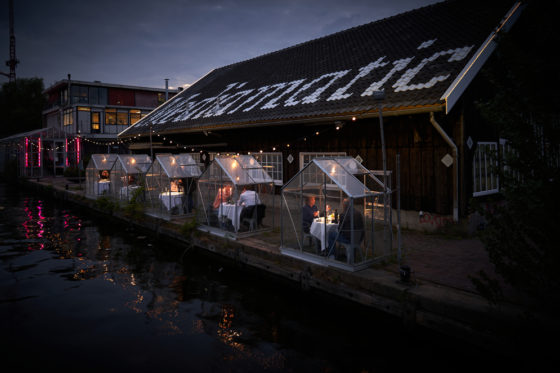 In Amsterdam, art gallery and restaurant Mediamatic hopes to win approval to organise fine dining in small greenhouses overlooking the water. The package is already sold out up to the end of June – even though no-one knows if the soirees can go ahead.

The popularity of the deal is a sign of the frustration many are beginning to feel as the Netherlands moves into May – with the prospect of several more weeks of being told to stay home ahead.

Elsewhere in the capital, clubs are thinking about opening their doors again – and have taken the radical step of suggesting a ban on everyone over the age of 30 rather than imposing the 1.5 metre rule.

‘The risk of infection among young people is very small,’ Pieter de Kroon, of the clubs’ lobby group OAC told the Parool when the plan was unveiled last week.

Hopes that this approach might win favour with the authorities were dashed, however, when city officials said the ban on organised events up to September 1 will continue to apply to clubs and concert halls.

Cafes and bars, however, have only been officially closed until May 20 – although few doubt the deadline will be extended – and many are worried for their futures.

Figures released by the government’s jobs agency UWV on Friday show that around 20% of the 104,000 approved requests for help in paying salaries come from small cafes and restaurants, with turnovers plunging by an average of 82%.

Cafes and restaurants were ordered to close on March 15, but many have now started offering takeaway services in an effort to generate some income.

However, according to RTL Nieuws, a number of cafes and bars are also planning to open their doors again from June 1, in the absence of more financial support from the government.

‘It is a question of survival,’ bar owner Laurens Meyer told the broadcaster. ‘The cabinet is not meeting its obligations. My fixed costs are ongoing. I can’t sack anyone but I only get partial compensation. This is not a sustainable situation, not for me personally and not for the industry in general.’

On Friday, the hospitality industry lobby group KHN described talks with junior economic affairs minister Mona Keijzer as ‘disappointing’. ‘We have now asked the prime minister to meet us this week,’ the organisation said.

‘Many enterprises are on the verge of going under,’ the organisation said. ‘If the cabinet does not intervene immediately, two thirds of cafes, bars and restaurants will close their doors for good on July 1.’

The cabinet did not ban hotels from accepting guests or campsites from opening for business – as long as each pitch had its own sanitary facilities – but many closed anyway as tourist numbers plummeted.

Hotels too are now looking into ways to attract overnight visitors. The Fletcher hotel chain, for example, is promising guests they will be able to eat in its restaurant while observing the 1.5 metre rule.

And the provinces of Zeeland and Noord-Brabant are opening up to tourists and second home owners again.

‘This means people who want to relax or work at home. And the national rules apply to them as well: stay at your temporary address as much as possible and avoid busy places.’