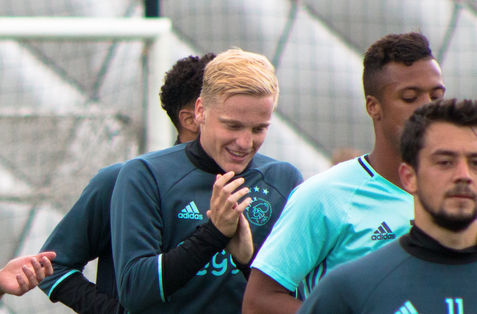 Ajax have said they will hold out for the right price before letting midfielder Donny van de Beek leave the club in the summer.

The 23-year-old has been linked with top European clubs including Real Madrid, Barcelona and Manchester United for over a year. In December the Telegraaf reported he had agreed in principle to move to Madrid for €55m, but the coronavirus crisis has put the international transfer market on hold.

Van de Beek is the only Ajax player so far to have agreed terms with the club and his personal management to leave over the summer, chief executive Edwin van der Sar said this week. Defenders Sergiño Dest, Nicolas Tagliáfico and goalkeeper André Onana are also known to be looking for a move.

Head coach Erik ten Hag confirmed last month that the club had an agreement with Onana to let the 24-year-old Cameroon international leave if a club matches Ajax’s valuation.

Dest had been linked with a €20 million transfer to Bayern Munich before the coronavirus outbreak, but his chances of signing for the German champions have receded. Tottenham Hotspur are also reported to be interested in signing the 19-year-old Dutch-born US international.

In February Ajax bought Brazilian forward Antony from Sao Paulo for €15.75 mln, rising to €21.75 mln. The 19-year-old was bought partly as cover for compatriot David Neres, who has not played since suffering a knee injury in the Champions League clash with Chelsea in November.

Feyenoord tabled a wage roughly equivalent to Linssen’s salary at Vitesse as the club tries to trim its wage bill now that competitive football has been suspended until September.

Linssen said both sides were keen to close the deal, but Feyenoord’s offer indicated the club did not regard him as a first-choice striker.

‘I took the new circumstances in professional football into account,’ he said. ‘There is no bitterness on my part. Feyenoord is a fantastic club – a dream. But I’ve made my own choice. In the end there was an offer and I didn’t accept it.’