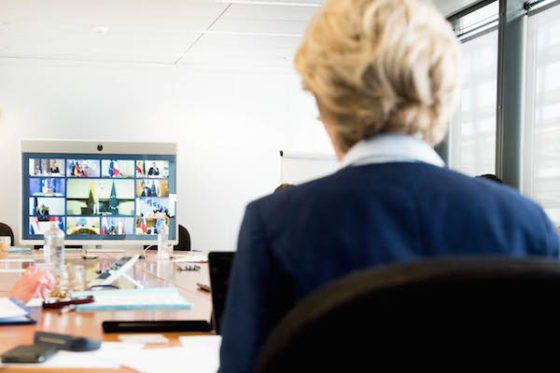 European leaders on Thursday agreed to support earlier agreed plans for a €540bn immediate bail-out package to help pay for job maintenance and medical costs during the coronavirus crisis.

They also agreed that the European Commission should take the lead in developing a recovery fund to help member states’ economies get back up to steam once lockdown measures are eased. That fund will be part of the MFF, the EU’s seven-year budgetary framework.

How that fund will be financed or operate still has to be decided, but the Netherlands and Germany have been adamant that countries should be able to draw on the fund on the basis of loans, rather than gifts.

Nevertheless, Dutch prime minister Mark Rutte, who has already warned the talks will be long and difficult, appeared in relaxed mood during and after the conference, despite furious rows earlier this month with southern EU countries.

‘We are going to work constructively and together on the basis of the European Commission’s recommendations toward the recovery phase, based on the multi-year budget,’ Rutte said on Twitter after the meeting ended.

Rutte declined to give figures of how big the fund could be. ‘What is a figure worth without political analysis,’ he told broadcaster NOS. ‘You are then just playing to your audience.’

The Netherlands is also keen that the Commission look at the impact of the crisis on the car industry, tourism and agriculture, as well as regional differences, broadcaster NOS said.

The recovery fund will be targeted towards the sectors and geographical parts of Europe most affected, European Council president Charles Michel said after the video conference.

‘The Commission proposal should clarify the link with the MFF, which in any event will need to be adjusted to deal with the current crisis and its aftermath,’ he said.

‘The Eurogroup in an inclusive format will continue to closely monitor the economic situation and prepare the ground for a robust recovery.’

Nevertheless, according to website Politico.eu, ‘national leaders remain fiercely divided over some of the most fundamental questions about financing a recovery fund, including whether the package should deliver assistance in the form of grants — as favored by the hardest-hit countries like Italy and Spain — or with loans.’

And the move to reinvent the MFF to also serve as an emergency rescue programme ‘is a potentially treacherous gambit aimed at circumventing a fierce fight among EU leaders over how to finance a recovery fund,’ Politico.eu said.