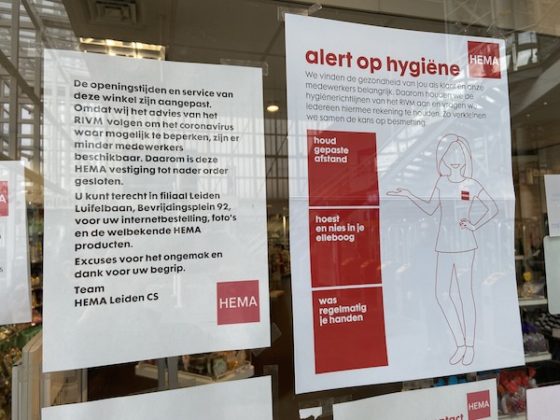 A dramatic 30% fall in sales caused by the corona crisis is threatening Dutch retail chain Hema, prompting CEO Tjeerd Jegen to tell landlords and staff – but not shareholders – to make financial sacrifices, the Financieele Dagblad reports.

A letter outlining the measures said that ‘as a consequence of the closure of the shops in the countries around us and the continuing loss of revenue in the Netherlands, the survival of the company will shortly be in doubt.’

The letter was sent a week before Tuesday evening’s decision to extend the Dutch lockdown measures and has been seen by the paper.

Jegen went on to say that the only way to turn the tide was to halve the rent paid for high street premises during April and May, saving the company some €6.5m. Suppliers will also have to wait to be paid and some orders have been cancelled. ‘There was even question of cancelling the chocolate Easter eggs’, one anonymous manager told the paper.

The CEO also said staff would have to wait for their annual pay raise as well, and that travel allowances will be scrapped for people working from home.

Shareholders, who are paid an annual €50m, have not been asked to make sacrifices so far, the FD said.

‘If there is one retailer which really didn’t need a corona crisis it’s Hema,’ CNV official Martijn den Heijer told broadcaster NOS. ‘They are only just finding the way up again and I’m not surprised the board is worried.’ Both unions CNV and De Unie approved the measures.

Hema, bought by Marcel Boekhoorn only 18 months ago, has been loss making since 2013. Its current debt stands at over €750m.

The company is also looking to the government’s emergency fund which compensates up to 90% of wages. Hema employs 11,000 people of whom 9,000 work in the Netherlands.