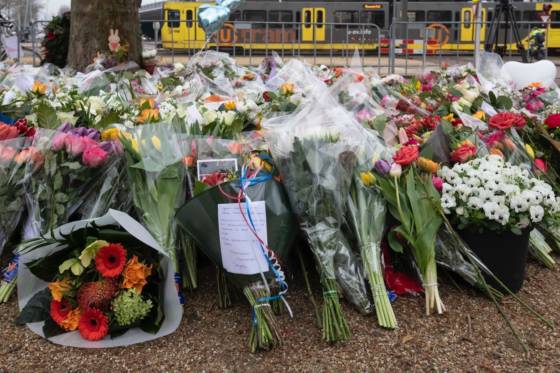 Flowers at the scene of the shooting last year. Photo: Politie.nl

The man accused of shooting dead four people and injuring several more after he opened fire on a tram in Utrecht a year ago has been jailed for life.

Gökmen Tanis was not in court to hear the verdict, and had been removed from several of the main sessions for insulting behaviour directed at both judges and witnesses, and for spitting at his lawyer.

The Utrecht court ruled Tanis was guilty of four murders, three attempted murders and of threatening the lives of 17 others with terrorist intent.

‘The suspect sowed death and destruction in broad daylight and terrified society with his chilling act,’ the court said. ‘And that is exactly what he intended with his terrorist attack.’

Tanis had admitted to opening fire on the passengers on March 18 last year soon after he was arrested on the day of the shooting.

The public prosecution office said the defendant, who it acknowledged has a personality disorder and limited mental capacity, was nevertheless able to plan his deeds in advance and should therefore be handed the maximum penalty.

Currently in the Netherlands, life sentences mean just that, but cases will be assessed after 25 years for possible release. There are currently around 30 prisoners serving life sentences in Dutch prisons, including several gangland murderers and Mohammed Bouyeri, who murdered filmmaker Theo van Gogh in 2004.