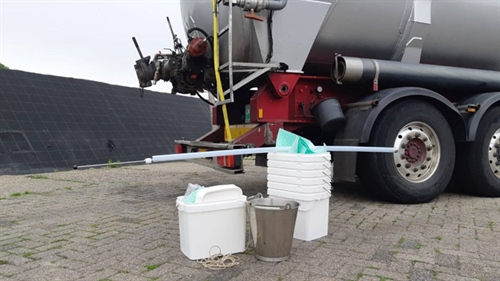 Waste tankers at the factory. Photo: Politie.nl via OM

Three people who ran an animal feed factory in Noord-Brabant have been arrested for selling unidentified food waste to livestock farmers, risking both human and animal health, the public prosecution department said on Wednesday.

Some 7,000 tonnes of waste from food processing firms was found in tanks and silos at the factory when it was closed down in an emergency operation by food safety board inspectors in May last year.

The three arrests follow an eight month investigation into the operation, in which uncertified food waste was processed and sold to livestock farmers. Inspectors suspect the company may have earned €4m from the scam, which ran from 2017 to May 2019.

In addition, the factory did not meet hygiene standards and many of the tanks were rusty and seriously contaminated.

The men are also suspected of forging documents, making it impossible to check the origins of the animal feed. ‘In the case of contamination, it is necessary to be able to trace the origins and so prevent further spreading,’ the department said.

The three men who have been arrested run the company and are criminally responsible, the public prosecutor said.

‘Actively undermining the system poses a risk not only to each farmer but to confidence in the entire food chain for humans and animals, the statement said. ‘Farmers and consumers have to be able to count on animal feed being free from contamination.’