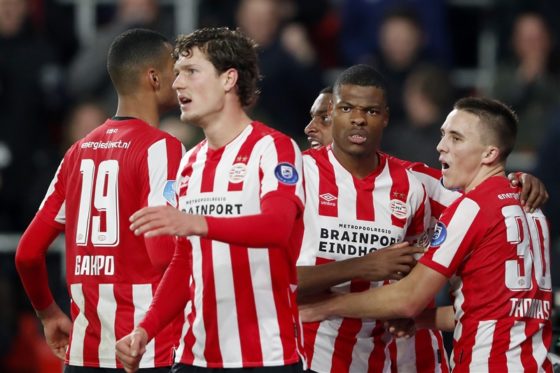 The Dutch football association has cancelled Sunday’s Eredivisie fixtures as the country braces itself for winds of up to 120 km/h when Storm Ciara arrives.

The KNVB said it could not guarantee the safety of players and spectators at the four matches. In August a section of AZ Alkmaar’s stadium roof collapsed in strong winds, though the ground was empty at the time.

The top three clubs in the table – Ajax, AZ Alkmaar and Feyenoord – all had their games postponed. AZ and Feyenoord were due to play each other in Alkmaar while Ajax were scheduled to visit Utrecht. The matches between Sparta Rotterdam and ADO Den Haag and Emmen v Twente Enschede will also have to be rescheduled.

Jan Bluyssen, who is in charge of the KNVB’s fixtures, said: ‘There are huge interests involved, but ultimately this is about the safety of supporters and players. At the moment everybody’s dismayed, including us. But we don’t want to have it on our conscience if people get into trouble.’

In the games that went ahead on Saturday, RKC Waalwijk missed the chance to make up ground on ADO as they played out a goalless draw with PEC Zwolle that leaves them five points adrift at the foot of the table.

Third from bottom VVV Venlo took a 1-0 lead at Heerenveen when Johnathan Opoku scored from the penalty spot after 57 minutes, but had to settle for a point after Sherel Floranus equalised 12 minutes later.

PSV Eindhoven won their first match of 2020 with a 3-0 win over Willem II, thereby denying their Brabant neighbours the chance to leapfrog Feyenoord into third place. Denzel Dumfries opened the scoring on 32 minutes with his sixth goal of the season before Ryan Thomas’s sliding shot and a late own goal by Mike Trésor Ndayishimiye crowned an emphatic win.

Groningen overcame Vitesse Arnhem, who were without their talismanic top scorer Bryan Linssen, 1-0 thanks to a 13th-minute penalty by Ramon Lundqvist. It was Vitesse’s first defeat in eight games since the departure of their former coach Leonid Slutsky.

Cyriel Dessers became the league’s top scorer as he netted both goals in Heracles Almelo’s 2-0 win over Fortuna Sittard on Friday night. It was Heracles’s first win since November and lifted the club into the top half of the table.