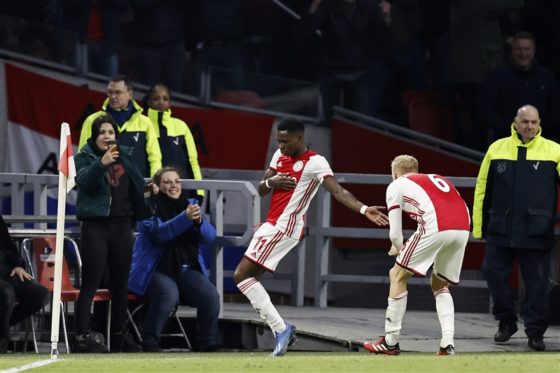 Ajax edged past PSV Eindhoven to restore their lead at the top of the Eredivisie in a match overshadowed by injuries to three key players.

Joël Veltman, Ryan Babel and goalscorer Quincy Promes all limped off during the game to leave Erik ten Hag with a selection headache. Veltman picked up a knee injury and Promes pulled up with a hamstring strain in the first half, while Babel’s game ended early after a clash with PSV goalkeeper Lars Unnerstall.

AZ Alkmaar had gone level on points with the champions on Friday night with a comfortable 4-0 win against bottom club RKC Waalwijk, while PSV’s defeat leaves them four points behind Feyenoord and Willem II in the battle for third spot.

Ajax rarely looked in danger against PSV, but were unable to add to Promes’s 35th-minute strike, which came when a blocked shot by Donny van de Beek landed at his feet.

Ten Hag told NOS: ‘I don’t know if it’s just coincidence, but this squad has been incredibly badly in the last calendar year. You just have to accept it. We have a lot of players to choose from and we need them.’

AZ cruised to a comfortable win over RKC in the opening match of the weekend. The pick of the four goals was Oussama Idrissi’s second on 65 minutes, as the winger cut in from the left and unleashed an unstoppable shot from the edge of the penalty area.

Dick Advocaat’s Feyenoord were equally impressive against Emmen as the Rotterdammers ran out 3-0 winners. Oguzhan Özyakup, who arrived on loan from Besiktas last week, scored the opener in the second minute, before Nicolai Jørgensen and Luis Sinisterra added goals in the second half.

Willem II stretched their unbeaten run to nine games with a 1-0 win over Heracles. Dries Saddiki deserved better than an assist for his acrobatic scissor kick, but when his shot came back off the post Sebastian Holmen was on hand to tap it into the net.

PEC Zwolle moved out of the relegation play-off places as Yuta Nakayama’s 43rd-minute goal was enough to see off Groningen and earn the Overijssel side their first win in four games.

Below them, ADO Den Haag missed a golden chance to make up ground when Thomas Necid saw his penalty and the rebound both saved by Vitesse Arnhem’s Remko Pasveer. The match ended goalless.

Fortuna Sittard also edged closer to safety with a 2-1 win over Heerenveen, who failed to win for the sixth league game in a row. Mitchell van Bergen gave the Frisian side a sixth-minute lead, but Felix Passlack pounced on a loose ball to equalise on 15 minutes before an own goal by Sven Botman sealed Heerenveen’s fate in the second half.

Twente Enschede ended an even longer winless run, stretching back to November 10, by beating fellow promoted side Sparta 2-0 thanks to late goals from Peet Bijen and Ajax loanee Noa Lang.

Two teams that have yet to lose in 2020, VVV Venlo and Utrecht, shared the points in the Limburg, with both goals in their 1-1 draw coming from the penalty spot. Oussama Darfalou put VVV in front in the 51st minute before Simon Gustafson replied nine minutes from time.