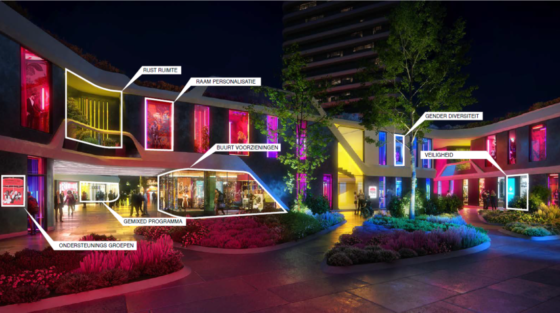 A city hand-out showing what the centre could look like

The news comes in the wake of similar plans for Amsterdam’s red light district which were published earlier this week.

Research by the The Hague council found that, unlike in Amsterdam, many prostitutes would be prepared to make the move to new location on the edge of the city centre, provided their current places of work are not closed for the time being.

‘The health and safety of sex workers are of paramount importance and a centre would meet those needs,’ health alderwoman Kavita Parbhudayal said. ‘If we don’t do this prostitution will become invisible and illegal and the area of Doubletstraat, Geleenstraat and Hunsestraat will deteriorate even further,’ she said.

City development alderman Boudewijn Revis said the centre will not be financed from the public purse. ‘We have found that moving window prostitution away from the current area is financially feasible. The Hague will facilitate but not finance,’ he said. ‘That is up to private companieswith whom initial talks have been held,’ Revis said, without specifying who the parties are.

The council said the next step is to develop the plans and to consult with locals near the projected building.