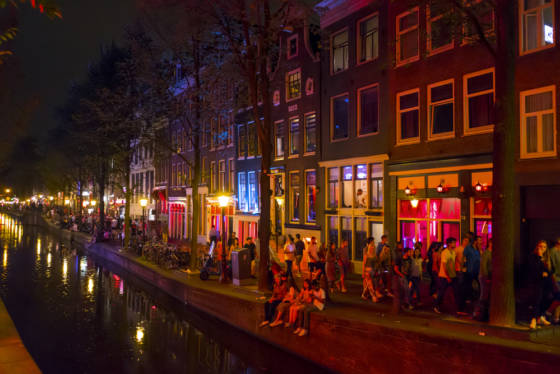 The aim is not to replace prostitution in the red light district, but open the door to alternative locations so sex workers can relocate if they feel more comfortable, officials say.

Mayor Femke Halsema said last July she would take drastic steps to reduce the pressure of tourism in the red light district and stop sex workers being harassed by hordes of visitors.

The mayor said the city had created a ‘many-headed monster’ in the Wallen district by not tackling the growing problems caused by noisy, drunken stag parties and guided tour groups.

The report goes so far as to describe the hotel having a high quality interior with a ‘large glass roof for daylight or looking at the stars’. ‘All the rooms would open onto a plaza which has proper, yet intimate, lighting,’ the report states.

The new development should not be placed on a far-away industrial estate but should be far enough away from areas which are too busy at present, officials say. And a location close to the Noord-Zuid metro link would be an added advantage.

Reactions from local politicians so far have been largely positive, although, they point out, there are major obstacles still to overcome.

‘The mayor has made a good effort to take the discussion on,’ said VVD councillor Daan Wijnants. However, the likely effect of the plans on the red light district itself remain ‘vague’, he said. ‘Reducing the pressure there and improvements for sex workers must be paramount,’ he said.

The research does state that most prostitutes currently working in the red light district want to remain there. ‘We feel safe in the Wallen and we don’t want to work in a such a hotel,’ Felicia Anna, of prostitutes lobby group Red Light United told the Parool.

Councillors are due to discuss the proposals in March.

City councillors last week voted to ban tour guides from taking tourists around red light district windows in all parts of the city from April.