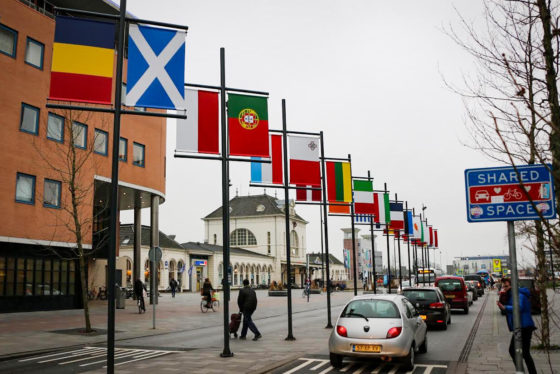 The Saltire among the EU flags outside Leeuwarden station. Photo: Jan Ligthart

The Frisian capital Leeuwarden has replaced the Union Jack with a Scottish saltire in its parade of European flags as a gesture of solidarity after Brexit.

Alderman for culture Sjoerd Feitsma told the Friesch Dagblad he came up with the idea after visiting the Robert Burns festival in Edinburgh at the end of January.

‘I was thinking of replacing the Union Jack with an EU flag or a rainbow flag,’ he said. ‘I noticed what a big deal it was for the Scots that they’re no longer in the EU and that they are still flying the European flag in the Scottish Parliament. That’s when I thought: we could do something with this too.’

The Scottish Parliament voted on Friday not to take down the EU flag on Friday evening when the UK formally left the European Union. EU rules and regulations will continue to apply until the end of the year while negotiations on the future relationship take place.

European officials including former European Commission president Donald Tusk have said they are open to the idea of Scotland joining the EU if it becomes an independent nation. In the 2016 Brexit referendum, 62% of those who voted in Scotland opted to remain in the EU.

Leeuwarden has a number of cultural ties with Edinburgh through the Eurocities network and the fact that both cities have City of Literature status.

Feitsma told DutchNews that the Saltire would stay up with the 27 EU flags outside the city’s main station for at least the next year.

‘People see it as a nice gesture, but there is also a serious message about wanting to maintain our cultural ties,’ he said. ‘About two-thirds of the responses we’ve had from Scotland have been positive, including from unionists who don’t want to leave the UK but still value the connection with Europe.

‘The banners need to be replaced every two to three years. If nothing has happened in the UK in that time then we might replace it with a European flag. We’ll have to see how Brexit works out.’